The bluefin tuna bite on the mid-range grounds off New Jersey’s northern Shore has been productive for private and charter boats, but party boats are also getting into the act since NMFS has made it possible for them to keep a few tuna.

The Queen Mary from Point Pleasant had a trip last week during which they were hooking tuna up to 100 pounds on jigs by 8:30 a.m. They boated their limit of two over 47 inches and released four after fights of over 30 minutes. A move to another area with smaller tuna also proved to be productive.   All the action was on jigs. The next trips are coming up on July 23 and 30. Lots of bonito and small blues are being caught on other days. 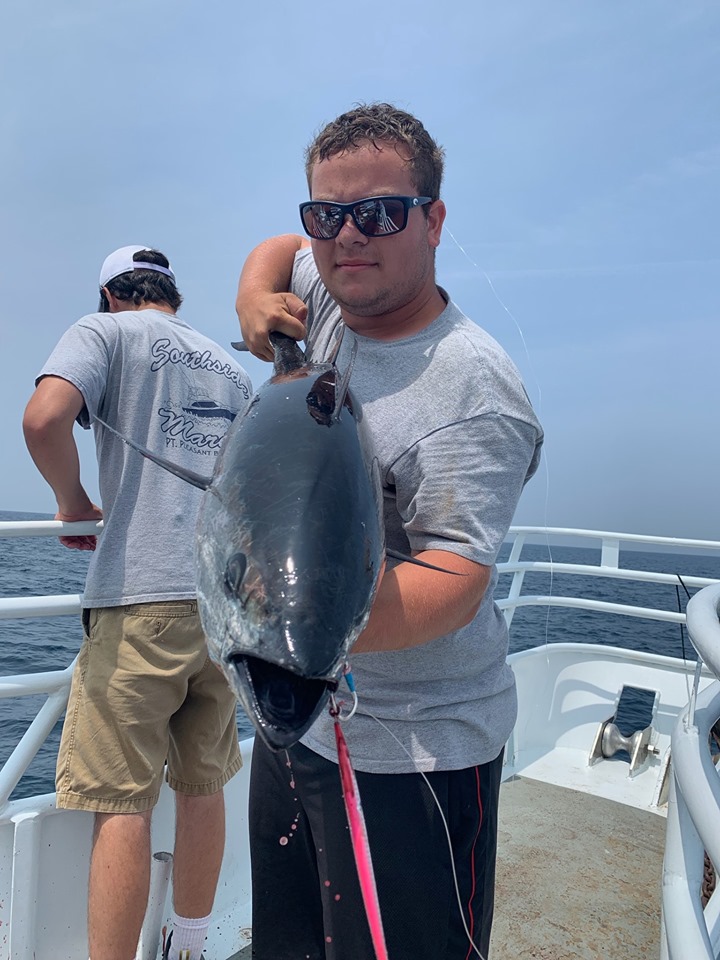 As previously noted, the Jamaica from Brielle has added a tuna trip on Monday — and the Golden Eagle from Belmar has added one on July 30 from midnight to 4 p.m. The cost for the latter is $260 with a limit of 30. Though there wasn’t a report from the Golden Eagle at the time this was written, they had good action yesterday with blues and chub mackerel though not as many bonito as before since the drift was too fast and they had to anchor.

At Atlantic Highlands, Capt. Ron Santee reported a new monthly fluke leader during Friday’s trip of the Fishermen as Bill Venezia boated a 6 11/16-pounder. He also limited and caught about 30 shorts.  A 4-pound sea bass was also boated. The Fishermen is chartered tomorrow.

Capt. Rob Semkewyc of the Sea Hunter saw more quality fluke Friday when his fares also were treated to a whale show.

The Sandy Hook Bay Anglers Club Fluke Tournament winds up its two-day run on Sunday. At this writing I haven’t had any calls from excited anglers in that contest or the one-day Raritan Bay Anglers Fluke Tournament which featured so many Calcuttas that the winner, if all-in, may need a body guard to get home.

The marine forecast for Sunday is for west winds at a mere 5-10 knots.

The Gambler from Point Pleasant had a season-leading fluke last weekend when Curtis Mc Nary boated an 8.14-pounder. However, they had something much more unusual Friday when two small cobia were released. Blog reader Frank Jones sent a shot of his son Kyle, a mate on that boat, with one of them. The minimum size for cobia in N.J. is 40 inches with a limit of one per angler — but only two per boat.