With fine weather predicted, anglers can pick from among many alternatives this weekend.

As noted in last night’s blog and illustrated with a photo, Capt. Jim Freda of Shore Catch out of Manasquan Inlet had great bluefin tuna fishing on the mid-range grounds Wednesday when the fish were marking from 30 to 50 feet down and being caught both jigging with St. Croix Mojo spinning rods and trolling with ChatterLure spreader bars as everyone in the Mike Kelly party caught their first tuna among 23 hooked.  Freda has openings in August when yellowfins should also be available nearby. Call him at 732 762-0870.

At Fisherman’s Den in Belmar Marina, Bob Matthews reports ocean fluking has improved with many keepers being boated. MacKenzie Lose boated a fluke over 8 pounds in Shark River Inlet while fishing with her grandfather Fran Mullin. Snappers are getting up to decent size for kids to catch — and for fluke bait.

Joe Mellilo reports from Castaways Tackle in Point Pleasant that fluke have been hitting in the local surf on Gulp. One angler told him they were hitting like blues in the wash.

Grumpy’s Tackle in Seaside Park was enthused about an abundance of kingfish in the surf on clam, squid or Fishbites. There are also cocktail blues in the surf for those fishing bunker or mullet.

The topwater bite wasn’t there in Shark River when I arrived this morning, but blues hit as soon as I switched to the ZMan Swimmerez paddletail — and school stripers followed as I released three blues up to about 5 pounds plus four stripers to 23 inches. Another angler broke a rod on what was probably a larger blue. Vinny D’Anton checked the beaches again but found no life.

Friday’s forecast is for southwest winds at just 5 knots before increasing to 10-15 in the afternoon.

There was no report from the Golden Eagle out of Belmar, but they had a continuation of fine bonito fishing again yesterday along with small blues and chub mackerel.

My daughter Cyndi figured out why readers had to scroll through old blogs in order to get to the new one. Hopefully, that problem is over.

Jim Hutchinson Sr. reports for the Beach Haven Charter Fishing Association that Capt. Bob Gerkens fished the Mid-Atlantic Blue Marlin Cup on July 4 with his Hot Tuna and Mike Yocco with his MJ’s crew in one of the Northern canyons.  During the 9 hours of the tournament only one marlin was raised, but it did not take any of the boat’s offerings.  However, in the several hours of non-tournament fishing, 8 yellowfin tuna were boated, 3 of which were 40 to 60-pounds and a gaffer mahi of 20-pounds. This weekend the “Hot Tuna” will be fishing the Ocean City, Maryland, Tuna Tournament. Following that event Captain Bob will be open for offshore charters.

Max Rosenthal, mate on the party boat “Miss Beach Haven” reports the ocean fishing has been steadily improving. On recent trips keeper fluke, bluefish, and black sea bass have been coming over the rail. Max says that in many cases the females have been outfishing the male anglers.

Captain Dave Kreines reports he had the Turcich group out on “Byte Me” Charters for a half day bay fishing trip. The action was slow with a few short fluke and one giant sea robin. The next day the Martin family caught loads of short fluke with one nice keeper.  The action was steady all day with an assortment of dogfish, sea robins, and one blowfish. The kids aboard had a great time.

Captain Brett Taylor of Reel Reaction Sportfishing reports he is taking parties both to structure for bottom fish like ling and black sea bass while also continuing his productive fluking. He had Steve Trapp, daughter Angela, and friend Joe Kacez on a 4-hour bay fluking trip. Despite strong winds they ended the day with 8 keeper fluke to 5-pounds.

Captain Gary Dugan has been fishing ocean reefs and structure for a while now and reports the fluke fishing has been getting better and better. He says he is putting fluke in the cooler almost every trip. He is especially excited about this time of the year with the variety of species he is seeing. In addition to the fluke, he has been catching black sea bass, bluefish, cownose rays, sharks, sea robins, and skates. While not every fish is a keeper, the rods are steadily bending.

Captain Gary has been busy also co-hosting a tournament for the Italian American  Club in Little Egg Harbor. The captains meeting is Friday, July 19 at the Club at 105 Falcon Drive. Fishing is all day Saturday and half a day Sunday. In addition to many prizes there is a gala party after. Call Gary at 609-760-3717 for info on this great cause benefiting the club’s scholarship program and the emergency community relief program. 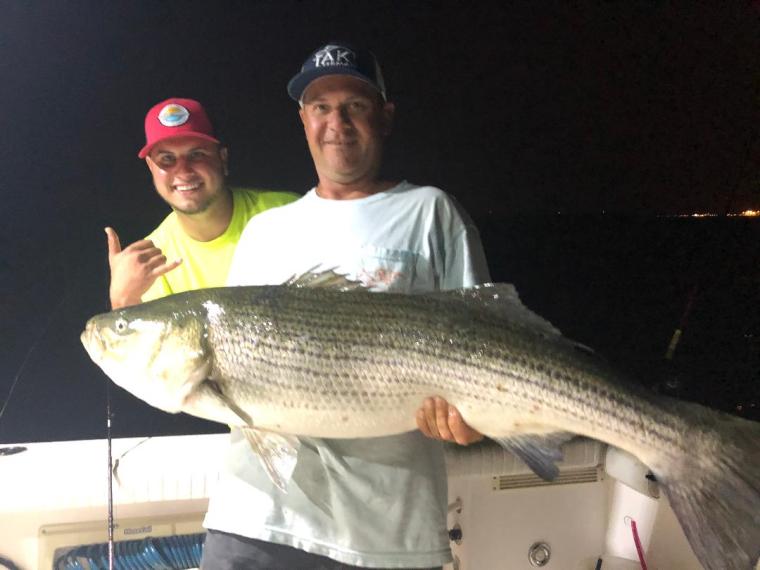 Chris Buchta with a 33-pound striper about to be released Tuesday night from Chuck Many’s Ty Man after hitting a live eel. Shawn De Vincenzo gives the thumb’s up.