The spell of generally nice fishing weather in the NY-NJ Bight is being interrupted  by  east winds which are predicted to be worst from Saturday night to Monday.  Small craft warnings are going up tonight, but Saturday may be fishable in some areas. Be sure to check with skippers before coming down.

It was already somewhat rough on the ocean today, and only one report was received from Atlantic Highlands about the fluking. Prowler V started offshore, but only found a few keepers among many 16-to-17-inch fluke plus sea bass that also had to be released. They went into the bay for comfortable fishing by noon, and will only fish in the bay on Saturday for anyone willing to try there.

Capt. Stan Zagleski reported good fluking Thursday on his Elaine B. II from Bahrs in Highlands when John Lipari of Woodland Park  won the pool with a 5-pounder. 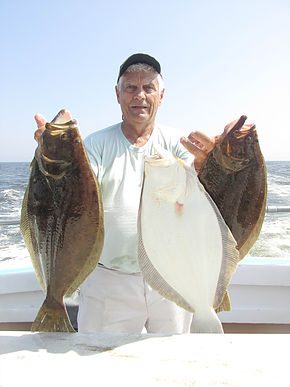 The Golden Eagle from Belmar reported a very good day of bluefishing which included an 8-pounder — the largest party boat blue I’ve heard of in some time. They also caught some fluke and released sea bass — and had excitement with a cownose ray.

Capt. Vinny Vetere of Katfish Charters in Great Kills used the big boat to deal with rough seas today as the Seakeeper keeps it stable. They used live bunkers to catch over a dozen stripers from 15 to 32 pounds. He may have one or two spots open on Sunday.

Vinny D’Anton of Wall fished his local surf this morning and nailed a 29-inch striper on a Chug Bug in very fishable conditions as the east wind was only blowing about 15 mph at the time. He also hooked a 24-incher, but I never raised a thing.  Vinny found only sand fleas and a calico crab in his keeper — no fish bait at all. The windy weather ahead may finally get mullet moving out of the rivers to improve surf fishing.