The weather forecast for the revival of the Manhattan Cup on Friday looks great, with sunshine and light west winds. That should be a big change from many of the past events which were held earlier in the spring. The first I fished featured wind and rain which turned to sleet — before ending in thunder and lightning. I’m looking for a much nicer day Friday in the contest to benefit wounded warriors which will be held at the much more accessible Liberty Landing Marina in Jersey City.  There’s still room for anglers on charter and private boats that were volunteered for the fundraiser being promoted by the Recreational Fishing Alliance.  Any angler wishing to join in the fishing and the festivities from breakfast to a big dinner and prize party at Liberty Landing Restaurant should call Capt. Frank Crescitelli at 917 468-4817 or Gary Caputi  at 732 740-9982.

Fluke fishing was surprisingly tough today.  Capt. Stan Zagleski expected much better with a extra hour of outgoing in the morning, but the early bite on Elaine B. II from Bahrs in Highlands didn’t hold up.  There were some limits, and decent keepers (as shown below), but shorts dominated. 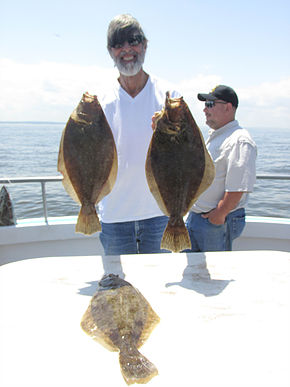 At Atlantic Highlands, Capt. Ron Santee  of the Fishermen reported it was a pick for a couple of hanfulls of keepers among many shorts. One angler released 14 shorts. The pool went to a 4.3-pound fluke.

Capt. Rob Semkewyc had a similar story on his Sea Hunter as he had to do a lot of moving for a few limits up to 4 pounds while some fares only caught shorts.

At Belmar, both the Golden Eagle and Miss Belmar Princess jigged some fussy small blues early before switching to sea bass to add to the catch.

Capt. Vinny Vetere was disappointed in the striper trolling from his Katfish out of Great Kills as only smaller bass up to 25 pounds cooperated even though he stayed out an extra hour. He’s open both Thursday and Friday.

Vinny D’Anton of Wall had a fine morning of shore fishing when he caught a couple of stripers up to a 25 1/2-incher and four cocktail blues on his Chug Bug in Shark River before going to a local beach to fish with sand fleas. After starting with a short, the bass turned on and he kept a 28-incher before staying much longer than expected to end up with six up to 31 and 35-inch releases. His bass had calico crabs in its stomach along with some sand fleas and a clam-baited hook from some unfortunate angler who has probably been telling stories about the big one that got away.  I got to the river late, but was surprised by a 21 1/2-inch stripers that blasted a relatively large Tactical Anglers Bomb Jr. popper, and also released a small blue that destroyed a Kettle Creek soft plastic.

At Seaside Park, Grumpy’s Tackle reported that surfcasters fishing clams for mostly short stripers are catching ever-larger black drum up to over 26 pounds. The only surf blues have been hitting bunker chunks.

Jerry Lasko and Maren Toleno of Point Pleasant cast poppers on the bay side of IBSP in the morning, but the only hit came from a houndfish that grabbed Maren’s popper. Those tropical needlefish aren’t normally seen this far north until late summer.