As northern anglers are gearing up for the first weekend of offshore tournaments,  those to the south have already been scoring with sharks and even some relatively inshore bluefin tuna.

The first big shark contest is the 38th annual South Jersey Shark Tournament out of South Jersey Marina in Cape May which runs from Thursday through Saturday after the 7:30 p.m. captains meeting on Wednesday. That $600 entry event paid out $307,763 in 2017.

The 5th annual Warriors for Warriors Charity Shark Tournament runs out of Hoffman’s Marina West in Brielle to benefit Operation Restored Warrior from June 8 to 10 with a $500 entry. The captains meeting is 5-7 pm. Friday in the marina.

While the Jersey Coast  Shark Anglers have changed their Mako Fever Tournament (732 551-3912) to a nine-day format from June 16-24 in order not to have to deal with weather problems, the Greater Point Pleasant Charter Boat Association is sticking with the weekend format for their 33rd Mako Mania on June 23 and 24.  For info call 732 892-3666 or visit gppcba.com.

Adam La Rosa reports the Canyon Runner from Point Pleasant is still doing very well with bluefins in the canyons, but private boats using their information service are also trolling them at such nearby areas as the Hot Dog, Tea Cup, Elephant Trunk and the 30 and 40 lines out to the Lobster Claw and inshore of the Lindenkohl. One boat even came across some yellowfins.  Below are veterans with the bluefins they caught last week with Capt. Deane Lambros during one of the Canyon Runner’s free canyon trips for the military. 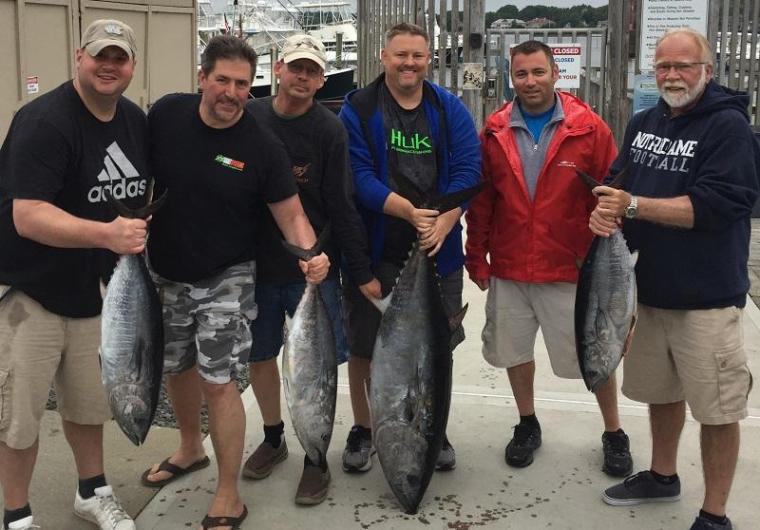 Fluking bounced back after the northeast blow. Bob Matthews of Fisherman’s Den in Belmar Marina reported very good catches from his rental boats in Shark River. John Hunter and a friend from Ridley, Pa. limited two days in a row up to a 5-pounder. Jesse Thomas of Wall limited to 4 pounds, and Ben Green also had a 4-pounder.

Capt. Stan Zagleski had a good drift early with the west wind on the end of the ebb and found good fluke action with Elaine B. II from Bahrs in Highlands until the tide switched. Some fares had limits. He’s looking forward to tomorrow morning with another hour of ebb.

At Atlantic Highlands, Capt. Ron Santee said there was still a swell running, but fluking on the Fishermen was decent — especially for Dan who had a 6.9-pound pool winner. Capt. Rob Semkewyc  said fluking was good enough for everyone on his Sea Hunter to end up with dinner.  He has only one spot left on next Tuesday’s afternoon trophy striper trip, and that Thursday’s trip is 1/3 full.

The Golden Eagle from Belmar found small blues on the surface that wouldn’t hit, so they eventually switched to sea bass and did very well.

The Queen Mary from Point Pleasant reported very good jigging for those blues that ran from 3 to 5 pounds and were caught on light tackle with small, plain jigs.

Matt Slobodjian sent the following report from Jim’s Tackle in Cape May: (scroll past boxes)

“We held our annual Shark Tournament Friday and Saturday. The weather held up and 31 boats competed. There was plenty of action with blue sharks, threshers, tigers, browns, makos, and even a couple of hammerheads. All but 4 fish were released. Another little bonus was there were bluefin tuna in several areas along the 30 line and out to the canyons. A few guys took the time to troll up a couple for dinner. The first place mako was caught by the crew of the “Miller Time” , a 261-lb. fish. Second was a 226-lb. mako caught by the crew of the “Fishin Technician”. The third place fish was a thresher caught by the crew of the “Team Player”  — a 324-lb. fish. I should explain even though the thresher was heavier, a mako shark takes precedence in our tournament. We would like to thank everyone who participated. You are the reason the tournament is a success. Thank you all we hope to see you again next year.

Weakfish slowed down this week, though more small trout are starting to show up around the rocks.  Sea bass fishing turned on again this week on the 20 fathom wrecks. Some charter boats reported limits by mid-morning. It seemed the fishing slowed down around the full moon and picked right back up after it.

The drum bite is still good. Bait is the issue now that the clam boat isn’t getting enough orders to go fishing, so they’ll be in short supply.”