No sooner did party and charter boats in N.J. get a chance to sail again than the weather is going to shut them out for a couple of days.

At Belmar, the Golden Eagle and Ocean Princess both reported good sea bass fishing today along with ling and some pollock and winter flounder, but the small craft warnings up now will go to a gale watch through Tuesday afternoon. It will be northeast 20-25 knots by morning along with gusts to 40 — plus 7-10-foot seas.  The Golden Eagle, which also pursued some bluefish reports to no avail,  has canceled through Thursday.  The Ocean Explorer has only called off trips through Wednesday so far. At least it now appears we’re not going to get much rain from Arthur. Photo below reflects Covid-19 bottom fishing variety on the Golden Eagle. 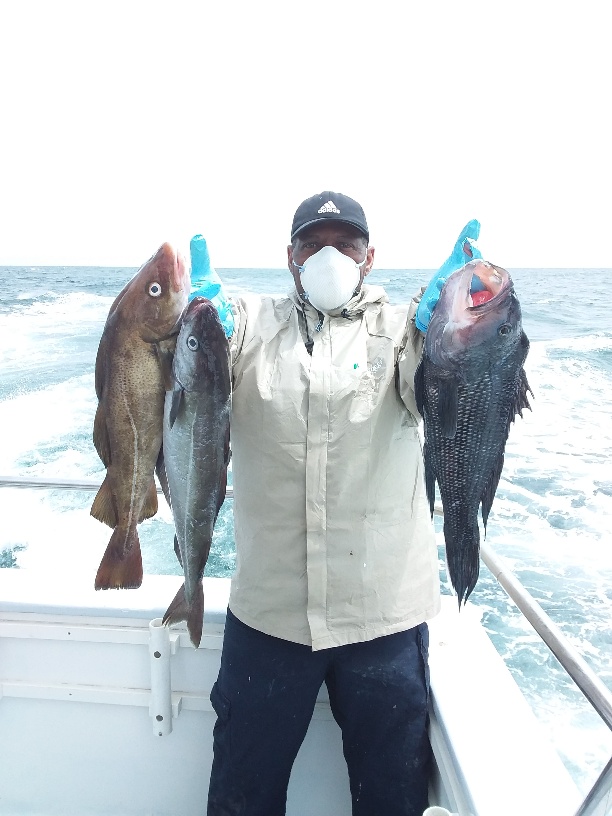 It looks better for the opening of the fluke season on Friday. Capt. Chris Di Stefano saw a boat with a hook & line commercial fluke permit loading up in Sandy Hook Bay today, while shore anglers were casting for cocktail blues.  Unfortunately for Chris, he was in the bay because the Raritan Bay striper bite was off. His friend from Highlands had lots of releases Sunday, but bunker spoons only produced a large male of 22 pounds that had an eel in its stomach. Chris said he only saw one other bass caught, and a couple of charter boats that braved a run to the Romer Shoal area came back quickly. Chris noted that some bass were trolled in the ocean on Sunday.

Phil Fischer said he was trolling bass in Raritan Bay yesterday morning before moving into Sandy Hook Bay where two 30-pounders hit. He noted that those bass had a lavender coloration which is typical of stripers migrating in from the ocean.