Connor Correll was bottom fishing off Islamorada in the Florida Keys yesterday with his father Todd (my nephew) on their Sea Vee 39 when he reeled up the biggest remora they’d ever seen. Todd checked the IGFA record with his cell phone, and then called me to ask if it would be legal since it came up snagged  — which is very common with remoras due to their small mouth.

I checked the IGFA rule book, which states that only deliberately snagging is a disqualification, and also called the office in Dania Beach, Florida to be sure.

Connor  had been holding the fish alongside in the water while Todd was calling me, and I assured them there was no other fish except an eel that would survive better in a live well as they are also called sharksuckers.

Remoras are oceanic hitchhikers who use a laminated disc on top of the head to grab a free ride with not only sharks but with whales, billfish and almost anything else bigger than themselves.  Natives in many tropical areas around the world learned to tie a line to them and let them swim to a sea turtle they wanted for food.

There’s little information about this relatively common species in the reference books I use, but The Many Splendored Fishes of the Atlantic Coast by Gar Goodson notes that they grow to 3 1/2 feet. However, they are skinny. I’ve encoutered quite a few at times while chumming for yellowtail snappers in the ocean and while casting jigs tipped with shrimp  inshore along the Keys, but  most looked to be about 2 to 3 pounders. The current IGFA all-tackle record is 5 1/2 pounds from Cat Cay in the Bahamas in 2002.

Todd  ran into Bud N’ Mary’s Marina at Islamorada to record an official 7 1/2 pounds to clearly set a new standard after the necessary papers, line samples and photos are accepted by the IGFA. 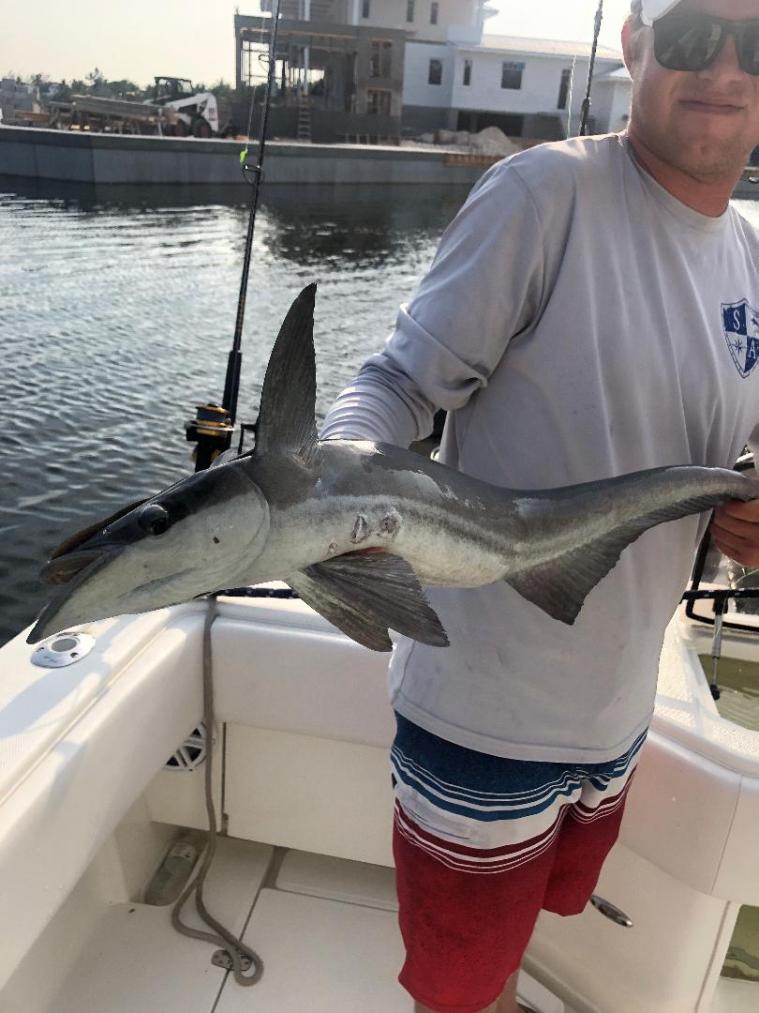 Conner, a student at Baylor University and a skilled competitive sailing  champion, should be joining me in the IGFA world record list with my 6-pound round whitefish from Putahow River Manitoba, Canada in 1984 and a 27 1/2-pound leather bass on a Tady jig from the Royal Polaris off Isla Clarion, Mexico in 1988. Both of those fish were also surprises caught while seeking other species.

Though southwest winds are gusting to 25 knots tonight and some rain is expected, the morning forecast is better with west winds at just 10 knots before switching to northwest with gusts to 25 knots in the afternoon.