Gov. Phil Murphy today closed New Jersey state parks and forests plus county parks due to instances of groups gathering in some areas over the weekend in violation of the state’s social distancing requirement during the pandemic.

Chuck Many got his Ty Man back from the winter fishery in Virginia and got into even better volume fishing today in Raritan Bay. Fishing alone, he went through 60 live bunkers in four hours while releasing 27 bass up to 24 pounds!

Jerry Lasko and Maren Toleno got into small stripers in the Island Beach State Park surf this morning before finding out that was their last shot there for some time. Maren released 17 of the 11-14-inchers, but Jerry had the “big” bass of 20 inches among his three. Small paddletails did the job.

The morning marine forecast is for southwest winds at 5-10 knots with possible showers and thunderstorms. The wind shifts to northwest in the afternoon.

The following releases from NOAA Fisheries details what they are doing to encourage the “dirty” practice of longlining  that kills gamefish and birds as well as targeted species by opening up closed areas which have greatly improved billfish and bluefin tuna stocks. Longliners have been trying to get into the closed areas under the pretense of research for years, and NOAA Fisheries seems to be giving in while trying to make it look like a conservation project. Read the release carefully and see what you think.

The measures remove one closed area, adjust management measures for two other areas, and change a gear requirement in the Gulf of Mexico. They are in part a response to the success of our Atlantic bluefin tuna catch share program in reducing bycatch.

Today, NOAA Fisheries announced measures that provide more fishing opportunities for vessels targeting Atlantic swordfish and some tuna species. We will continue under these measures to protect bluefin tuna from overfishing.

The changes give fishermen using pelagic longlines access to new fishing areas originally closed to reduce the number of bluefin caught unintentionally. Under the new rules, longline fishermen in the Gulf of Mexico are also required to use weak hooks only when bluefin tuna are spawning. This means they are only required to use them January through June rather than year-round.

Regardless of where or when they fish, longline fishermen are still not allowed to target bluefin tuna. They can keep some caught unintentionally, but they have to stay within their individual allocation of the U.S. bluefin quota. This allows them to fish for economically valuable species like swordfish and other tunas while protecting bluefin.

The measures are in part a response to the success of the Individual Bluefin Quota (IBQ) Program in reducing bluefin bycatch. We also designed the measures to help reverse a trend of underharvesting the U.S. swordfish quota.

“The success of the IBQ Program has allowed us to simplify and streamline Atlantic HMS management,” said Randy Blankinship, who leads the group responsible for managing Atlantic bluefin in the United States. “With this rule, we are optimizing fishing opportunities for pelagic longline fishermen while continuing to manage and conserve bluefin tuna through the IBQ program and other management measures.”

The Number of U.S.-Caught Swordfish is Falling

Every country that fishes for North Atlantic swordfish is given an annual quota by the International Commission for the Conservation of Atlantic Tunas (ICCAT). The collective total is  set at a level to ensure nations don’t harvest swordfish faster than the population can be replenished.

The baseline quota for the United States is 2,937 metric tons a year. U.S. fishermen harvest just a fraction of that. In fact, domestic swordfish landings have fallen almost every year since 2012. In 2018, for example, we only harvested 34 percent of our quota.

For seafood lovers in the United States, this means fewer opportunities to purchase local, sustainably harvested swordfish products. Our below-quota harvest rate might also have ripple effects for the future conservation of stocks beyond North Atlantic swordfish, including bluefin tuna. A portion of our quota could be reassigned to another country if we consistently do not use it. And the receiving country could have less robust domestic management for reducing bycatch or ensuring the survival of released fish.

This year, swordfish fishermen and others who use pelagic longline gear will be able to fish in three areas previously restricted during parts of the year. One of these is located in the Gulf of Mexico. Another is near Cape Hatteras, North Carolina, and the third is off the coast of New Jersey. All three were originally established to reduce fishermen’s interactions with bluefin tuna. That is accomplished now by a program that only allows pelagic longline fishermen to set out on trips if they stay within their individual share of the U.S. bluefin quota. 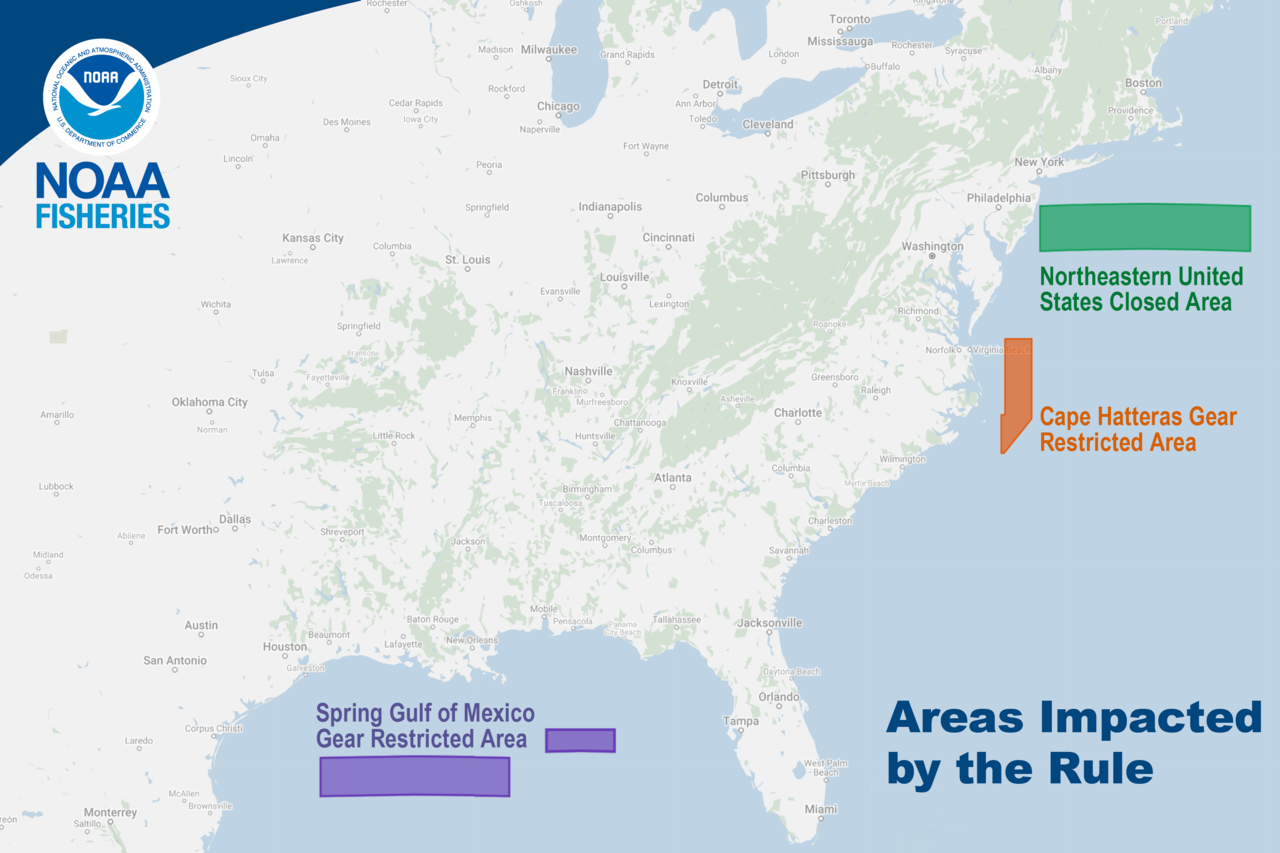 Providing access to these areas relieves an unnecessary regulatory burden on pelagic longline fishermen. It gives them greater flexibility for where they can target swordfish and yellowfin tuna throughout the year. They will also be able to use their expertise to avoid interactions with bluefin tuna.

Fishing Activity and Bycatch Will be Closely Monitored

Under the rule announced today, the Cape Hatteras Gear Restricted Area will be permanently removed on April 2, 2020.

The Northeastern United States Closed Area and the Spring Gulf of Mexico Gear Restricted Area are not being removed. Instead, we’re converting them to monitoring areas for three years. Pelagic longline fishermen will be allowed in those areas as long as their total bluefin tuna landings and dead discards stay below a set threshold.

Here’s how it will work in the new Gulf of Mexico Monitoring Area for the three-year period:

We’ll follow the same basic process in the Northeastern United States Monitoring Area, where fishermen historically couldn’t use pelagic longline gear in June. We will monitor annual bluefin tuna landings and discards to see if they stay below 72 percent of the available Atlantic pelagic longline quota. If so, fishermen will have continuous access to the area for the three-year period.

In both the Gulf and Northeast areas, staying below the threshold would suggest that these closed areas are not needed to protect bluefin from overfishing. It would show that other management measures are successfully ensuring that bluefin tuna catches stay within the overall science-based quota set by ICCAT.

At the end of the three-year evaluation, NOAA Fisheries will analyze the information we collect. We will then determine whether we will continue to use these closed areas to manage bluefin tuna bycatch.

Weak hooks are designed to straighten more easily under strain. This allows larger animals that exert more force on the hook to swim away after being caught. That feature helps reduce bluefin bycatch in the spring, when larger bluefin are in the Gulf to spawn. But this hook type has also been shown to increase unintentional white marlin and roundscale spearfish catches by nearly 46 percent.

The new seasonal requirement balances these impacts by tying weak hook use to the different seasons when bluefin and billfish are more likely to be caught. Fishermen are still required to use weak hooks when bluefin tuna are spawning. But they can choose to use other hooks in July–December, when white marlin and roundscale spearfish catches are higher in this area. 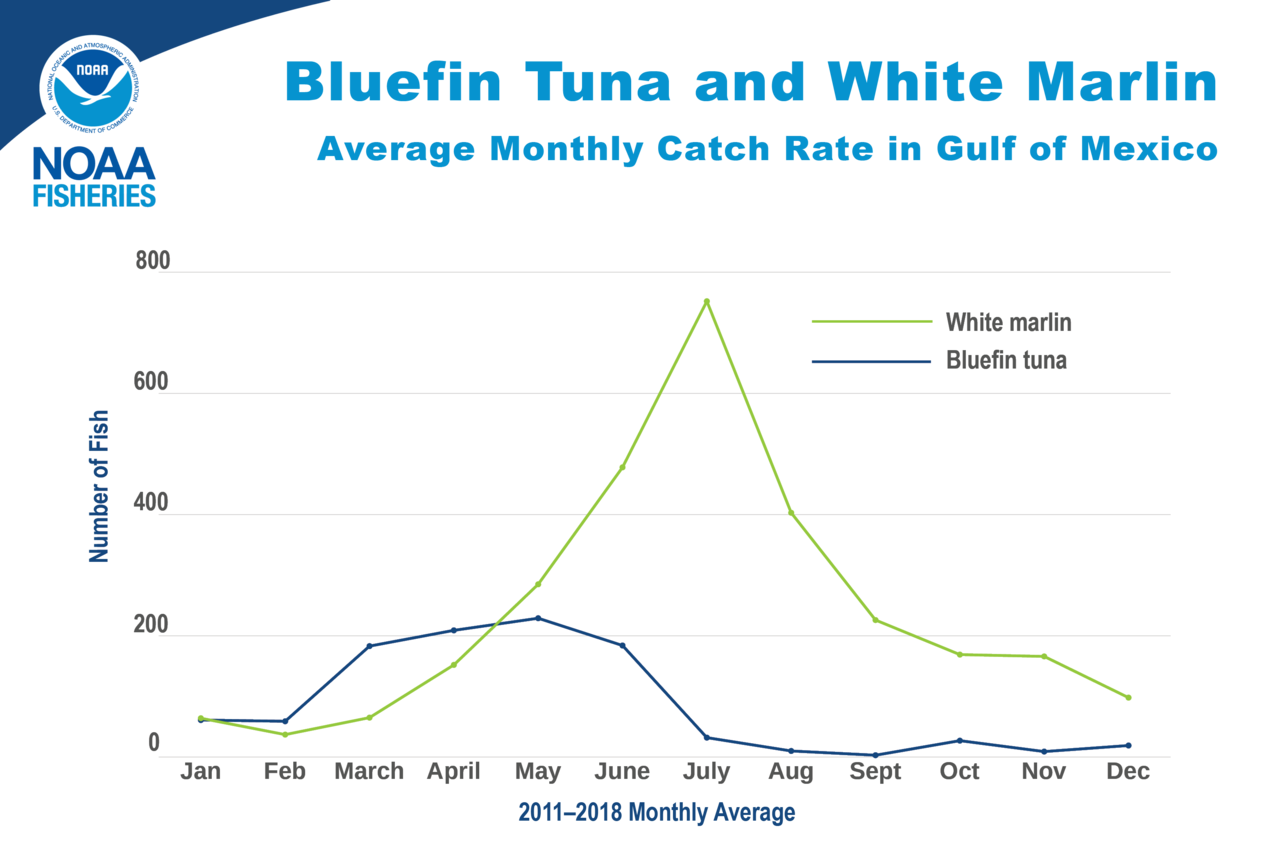 Bluefin Tuna Catches Will Still Be Managed Through the IBQ Program

In the midst of the changes from today’s announcement, the IBQ Program remains the same. Started in 2015, this catch share program creates individual vessel limits within the overall science-based quota for bluefin tuna. It applies to pelagic longline fishermen permitted to catch Atlantic swordfish and yellowfin tuna.

Each year, fishermen in the program are given their own individual shares of a portion of the U.S. Atlantic bluefin quota set by ICCAT. Every bluefin kept or discarded dead is deducted from a vessel’s account balance. That balance has to be above a minimum level at the start of each quarter to pursue a desired species. If a vessel falls below its quarterly allocation, it won’t be allowed to set off on a longline fishing trip unless the owners lease some quota from others in the fleet. The result is a financial incentive for fishermen to use their expertise to avoid interactions with bluefin tuna.

Since it was implemented, the program has reduced the average annual bluefin bycatch by 65 percent compared to the three years before. That’s about 330,000 pounds—or around four fully loaded semitrucks—less bycatch each year.

“The success of the IBQ Program comes from making fishermen individually accountable for avoiding interactions with bluefin tuna,” said Blankinship. “The program gives them operational flexibility while tapping into their professional expertise to help prevent overfishing.”

Last updated by Office of Sustainable Fisheries on April 02, 2020