East winds are gusting to 25 knots tonight, but it looks better by Sunday afternoon.

The morning forecast is for east at 15-20 knots before dropping to 10-15 in the afternoon. There will likely be some rain, drizzle and fog during the day.

While large stripers are the attraction in Raritan Bay, there’s been a showing of small bass for shore fishermen further south. Jerry Lasko and Maren Toleno fished an Ocean County beach this morning, and caught a few on paddeltails — though they were only 12 to 14 inches.

Though you can’t prove it by me, there are some small bass in Point Pleasant Canal. I saw an angler release one this morning, and he said he also caught another. I cast a Tsunami shad for about an hour during a moderate outgoing tide without a bump.

Below is the 18-inch blackfish released in the canal this week by Bill Hoblitzell after it hit a worm intended for flounder. 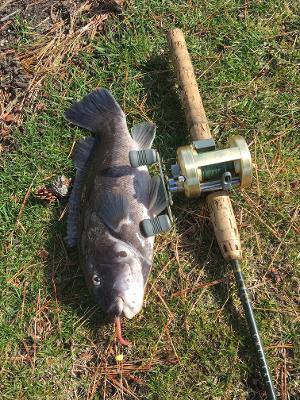