A gale warning is posted for tonight, and many boats are going to wait out another day before sailing into calmer seas on Thursday and Friday. The forecast for tomorrow is northwest at 20-25 knots and very cold early, but dropping to 10-15 in the afternoon.

Today’s forecast seemed to scare off most surfcasters in northern Ocean County, but Maren Toleno and John Gregor got into a hot surf bite on a northern Ocean County early this morning and had stripers on steadily for awhile even though there was no sign of anything in the area. Maren stayed most of the morning to work the rest of the beach and ended up with 20 striper releases. I got there a bit too late, but still managed three 23-inch releases plus a sun dial and a doubleheader if hickory shad. The latter was unusual because I was casting a Vision Surf Eel at that time and one of those 14-inch shad was on that lure which it couldn’t have possibly swallowed.

The surf was rough with a big swell, byt clean. The strong west winds should flatten it out very shortly

The Golden Eagle from Belmar has cancelled for tomorrow, but will sail early at 7 Thursday on a limited striper trip. They’re anxious to get out again after the great bite of surfacing bass yesterday.

The Sea Hunter from Atlantic Highlands took today off, and will do the same tomorrow. They had a great Monday trip with hundreds of shorts not far from port plus four bass over 28 inches on the boat. 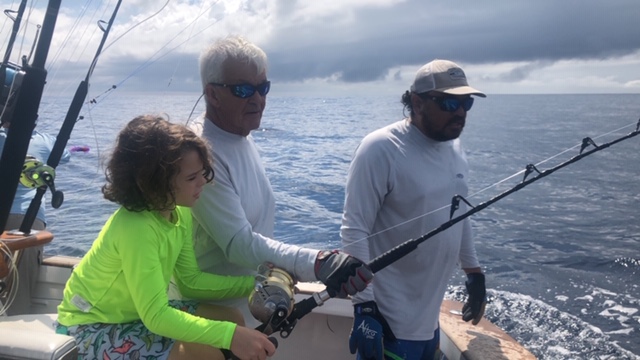