Catching a state or world record fish isn’t easy to do, and it’s a shame when the rare moment is lost because no one realizes the possibility in time.

That happened a couple of years ago on an Atlantic Highlands charter boat when a 5-pound scup (porgy) was officially weighed in, but only the state record was checked. Ironically, it turned out that the IGFA world record was lower at 4 pounds, 9 ounces. That can happen because the IGFA didn’t start listing records for the species until a few decades ago. Unfortunately, by the time I found out about that catch the fish was filleted and taken home. That prevented identification according to IGFA procedures.

The latest possible miss was on the Fishermen from Atlantic Highlands on Wednesday. Capt. Ron Santee had a good day of fluking, and noted that there was also the largest triggerfish he’s ever seen — 8 pounds.  Unfortunately, even the photo of that fish didn’t come out. It took me only a minute to find that the state record for grey triggerfish was set in 2016 at 6 pounds, 11 ounces. The IGFA world record is much larger at 13 pounds, 9 ounces from Murrell’s Inlet, South Carolina.  The grey triggerfish has become very common in N.Y. and N.J. waters over the last several decades. I’ve never heard of any other triggerfish caught locally, though the slightly larger ocean triggerfish or ocean tally averages somewhat larger in the open ocean where it’s easily distinguished from the grey. The queen triggerfish is a tropical species with a body coloration that looks like a Picasso painting.

If there’s any question about a record possibility just Google the state’s recreational state record fish — and you’ll have an answer right away. The IGFA search (IGFA world record fish) will take a couple of minutes . Keep this in mind should the opportunity ever occur.

Ocean bluefishing held up again today. The Golden Eagle from Belmar reported some medium blues were mixed in with the small fish  — and some big porgies were also jigged. The Big Jamaica from Brielle had a similar bluefish report, and they also jigged some sea bass.

The Manasquan River Marlin & Tuna Club Offshore Open got off to a very slow start due to the northeast winds this week. Andrea’s Toy got offshore to troll skipjacks, eight yellowfin tuna and 30 dolphin. They weighed in tuna of 16.75 nd 15.90 pounds plus an 11.55-pound dolphin. Bug took the lead in tuna at 59.25 pounds. The 48-boat field is either heading out how for their overnighter, or will be using their last day tomorrow,

The surf has cleared up, though there’s still a large swell. It was rough, but very fishable this morning at Spring Lake where Vinny D’Anton caught two stripers up to 25 inches on his Chug Bug. I only raised one fish at Manasquan, and released a 24-inch striper on a Tactical Anglers Bomb Jr. popper before joining Vinny to fish sand fleas in the whitewater surf without a hit.  The west winds should make the surf even more fishable this weekend.

Capt. Hans Kaspersetz, of Sheri Berri from Twin Lights Marina in Highlands, has returned from another trip to Quepos, Costa Rica where he fished on the Pacific Fly to catch nine marlin, one dorado (dolphin) and three tuna. 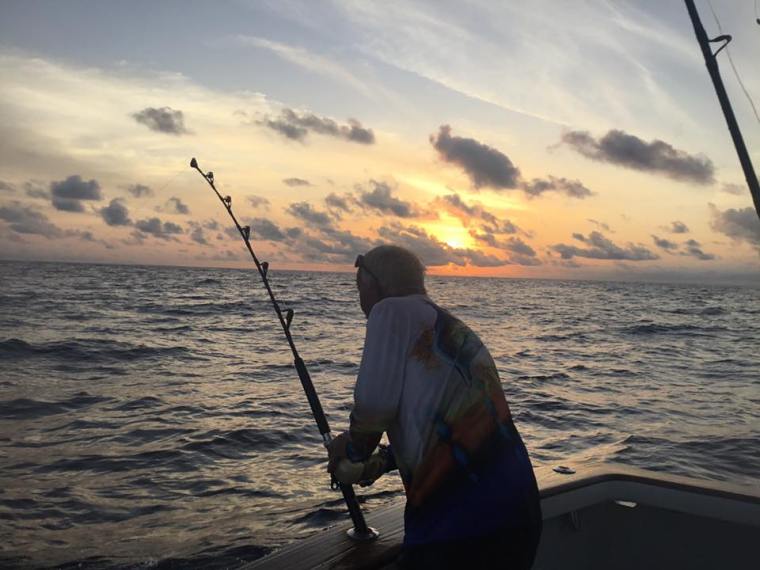