Anglers are running out of time to enter some tournaments this weekend.

As detailed in the release from Paul Haertel of the JCAA in last night’s blog, entry in their new format fluke tournament ends at 11:59 p.m. tonight. Entrants can pick one day from Aug. 16-18 to fish. Check that blog for details.

The Hudson River Fisherman’s Association closes entries for their Catfish Chaos Derby at 8 p.m. Friday. That Hudson River contest has weigh stations on both sides , and costs only $20 for adults and $10 for kids under 16. For info visit hrfa.org or Facebook@HRFA Catfish Derby – or call Scott Havner at 845 300-1562.

The captains meeting for the big-money MidAtlantic offshore trolling tournament is on Sunday. Read the press release a by Jeff Merrill at the end of this blog.

The bonito are back. The Jamaica from Brielle sent a report about them just after last night’s blog went in. High hooks had over 20 of the bonito that had been scarce for a few days. Bon Thach won the pool with a 6-pounder. Some blues and chub mackerel were also boated. In addition to those daily 7:30 a.m. trips, the Jamaica has a tilefish trip which sails at 10 p.m. Sunday and returns at 4 a.m. Tuesday.  A 31-hour tuna trip has been set for 7 a.m., Thursday Sept. 5. Reservations for those trips can be made by calling 732 528-5014.

The Golden Eagle from Belmar also got into the bonito yesterday, especially when they went into overtime during an afternoon blitz. They had already caught some blues, chub mackerel and keeper sea bass and fluke.  They went back to the same area today for a repeat of that action.

The Sea Hunter from Atlantic Highlands fished inside today due to the rough ocean, but still had plenty of action with mostly short fluke. There was one limit catch.

The northeast wind created what appeared to be ideal surf conditions for striped bass. When the Shark River regulars didn’t find much doing there, they all rushed to the surf only to find the same thing. I talked to an angler who had been at Manasquan since 5 a.m. trying everything without a touch in beautiful rough but fishable waters. Vinnie D’Anton and I even tried sand fleas at Spring Lake without a hit in the white water conditions that are usually best for fishing with mole crabs.

Bob Correll fished the Bay Head surf early and caught a small blue on his first cast — but nothing after that.

Tomorrow’s forecast is for east winds 10 knots, while it goes northeast again on Saturday — but at just 5-10 knots.

Below is a shot of the cutlassfish that Alvin M. Trotter caught while fluking off Belmar. As you can see, there’s no confusing cutlassfish with anything else! 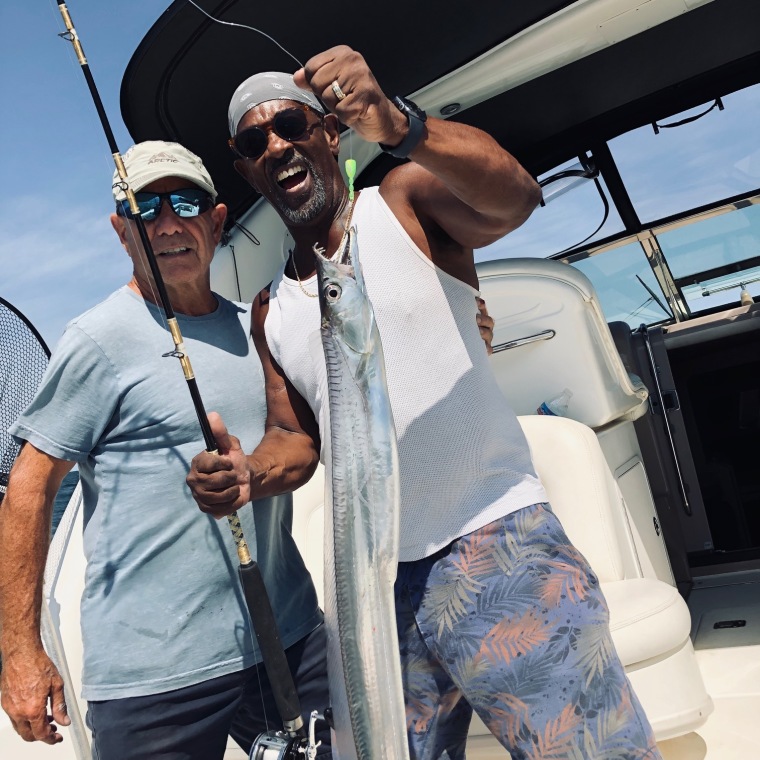 Sizzling Billfish Bite Sets the Stage for Another Exciting MidAtlantic!
Middle Canyons Hot and Cape May is Ideal Location!
You could run out of adjectives describing the current billfish bite along the canyons off the mid-Atlantic coast but safe to say “it doesn’t get much better then this!” A combination of cobalt blue water, abundant schools of forage species and ideal weather have produced incredible action with white marlin and blue marlin for those making the run offshore. And, with the 2019 MidAtlantic tournament just days away, this world-class bite couldn’t happen at a better time! That’s right! We’re just a few days away from sportfishing’s “Main Event” on the tournament calendar and preparation for this year’s event has reached a feverish pace. Canyon Club Resort Marina in Cape May, New Jersey put the Mid in MidAtlantic and, as always, will be “home base” for the tournament which is set for its annual run the week of August 18-23. At Canyon Club Resort Marina participants are right smack in the middle of the action enjoying the best access to the fish whether running north to the Hudson Canyon or south to the Norfolk Canyon as well as every canyon in between! In fact, during the recent White Marlin Open, Ed Russo garnered the Top Angler award for the tournament among a field of over 2000 anglers and 400 boats with 17 white marlin released and his boat, Big Deal, won the prestigious Top Boat award for 28 white marlin released during three days of fishing including 15 in one day while sailing from Canyon Club Resort Marina for the event!
Tournament entries have been flowing in at a steady pace and while Canyon Club Resort Marina is filling up, some slips are still available for vessels of various sizes. Join the tournament fleet at Canyon Club Resort Marina along with many of the MidAtlantic’s previous winners who sail from Cape May each year. Besides a world class marina that offers all the amenities to pamper tournament participants, family, crew and friends during the best week on the tournament calendar, you’ll also be at the tournament’s epicenter with access to the “Big Top” tent which includes the “Sponsors Midway” where you’ll find the latest in gear and services offered by MidAtlantic exhibiting sponsors. For dockage information and slip reservations give Paul Hoffman a call at 609-884-0199.
The tournament’s base entry fee of $3000 includes all dockside social activities for up to six people. Proceeds from ten optional calcuttas with fees ranging from $1000 to $6000 provide the prize money for the tournament. Last
year well over $3 million was paid out and the MidAtlantic continues to be, boat-for-boat, the richest big game
-more-
-2-
fishing tournament in the world. The event’s prize structure provides numerous big payouts each year and last year
eight winners walked off the awards podium with checks greater than six figures while eight others won $25,000 or
more!
Participants will select three days to fish during the week of August 19-23 with cash prizes awarded in various
ways for white marlin, blue marlin, tuna, dolphin and wahoo weighed as well as billfish released. Minimum
weights are 65 pounds for white marlin, 400 pounds for blue marlin and 50 pounds for tuna (big eye, yellowfin or
true albacore) to win cash. All boats must fish within 125 miles of the Cape May Sea Buoy regardless of sailing
port.
The MidAtlantic gets underway on Sunday, August 18 when late registration, calcutta entries and a cocktail
reception will take place from 1 – 4:30 p.m. at Canyon Club Resort Marina and the event’s only satellite venue,
Sunset Marina in Ocean City, Maryland. For your convenience registration can also be completed online prior to
the tournament at http://www.themidatlantic.com. You’ll also find complete rules, schedule, calcutta information, points
and prize breakdowns and a link to purchase 2019 tournament apparel. For additional tournament information
contact Tournament Director Aaron Hoffman at 609-884-0177. Be sure to follow the action via the South Jersey
Tournaments App which can be downloaded for free on any IOS or Android device from the Apple App and
Google Play stores. Additionally, follow the tournament on Facebook at The MidAtlantic Tournament; on Twitter;
@midatl and on Instagram; @themidatlantictournament.
It’s the 2019 MidAtlantic! It’s only a few days away and it’s gonna be another dandy! Come join the fun and
perhaps you’ll have the opportunity to join the winners on the podium and be in a photo with a big check.