Crazy Alberto Knie has established a reputation over the years as an expert fisherman for every species of fish found not only in the northern areas where he started out, but also in his adopted residence in Florida. His keys to success are simple ones — planning, patience and persistence.

That was all on display Monday as Alberto sought to get me into my first snakehead. The snakehead is a popular sport and eating fish in the fresh waters of southeast Asia, but an invasive species in Florida. Though the state would like to get rid of them, snakeheads have become a new target for anglers since they are a challenge to seek out and hook on lures. They certainly aren’t anyone’s idea of a beautiful tropical fish, but it are a worthy opponent.

Alberto picked me up in Ft. Myers for the long trip across the state to the Fort Lauderdale area where he’s caught snakeheads in several places. He warned that we wouldn’t be back until after dark, and that was certainly the case. There were no secret spots, as we fished parks and open areas accessible to anyone.

Unfortunately, the snakeheads didn’t cooperate at all in areas where we cast weedless Ribbit Frog lures over lilly pads and moss beds without effect. Alberto did hook a single largemouth bass of about 14 inches, and later added a couple of cichlids at another area where we were looking for peacock bass — another invasive which is now well-established and accepted by the state.

Alberto was planning to fly rod peacocks once the sun got higher and they could be sighted for sight casting. We never did see many, and Alberto ended up spotting one in a pothole almost up to the road. He made flip cast after flip cast into that hole with a fly on spinning tackle — and kept doing that for about 15 minutes before he finally annoyed it into taking the fly.

Alberto was holding back his best snakehead spots until evening as that’s the only time he felt they would hit. That’s exactly what happened at the first canal where he missed a big hit at the edge before breaking the ice with about a 3-pound snakehead.   He rushed me out of there to what he felt would be a better dusk spot. We had to walk across a busy highway to get to it, but I soon raised a snakehead before getting one on a big strike next to shore. The fish jumped and its undulating body looked like I was fighting an eel in the water before landing the thick 6.2-pounder as it was getting dark — just as Alberto had predicted and planned for. 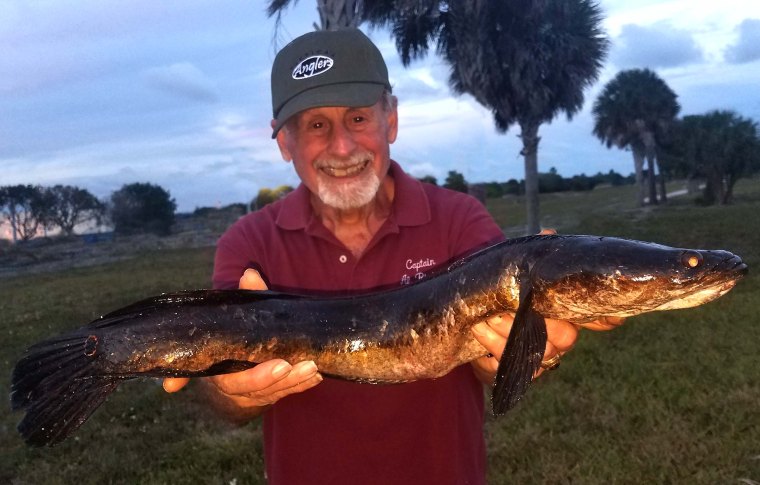 I’ll be adding another blog when the day’s striper results are in.