The Big Jamaica from Brielle will be sailing at 11 p.m. tonight and Tuesday to what’s almost definately the best bet right now — the far offshore deep water wrecks for jumbo sea bass plus some porgies, ling, white hake and pollock.

Limit catches of the big sea bass were common during Sunday’s trip when the pools were won by pollock. Kirk Davis of Middletown had a 15-pounder and Duy Mack of Hamilton a 12-pounder.  Reservations are required for these trips and others the Jamaica will be running throughout the Christmas period. Call 732 528-5014. Don’t worry about the cold, as you may be wearing gloves at the dock but be taking them off when the anchor is dropped as offshore water temperatures are higher and it can be quite mild out there.

The Fishermen from Atlantic Highlands has stopped operating until spring, but striper anglers can fish aboard the Sea Hunter from that port on Wednesday and Friday,

This morning’s north wind was stronger than predicted and hard on surfcasters. Jim Louro toughed it out from Belmar to Shark River Inlet for two hours since the waters were clear and he saw some birds picking. The one bass he caught the day before was unusual in that it was larger than most at 25 inches and slim — wheras all of the smaller bass we’ve been catching in the surf appear to be stuffed with sand eels.

The Elaine B. II from Bahrs in Highlands will be sailing for blackfish on Tuesday at 7 a.m. 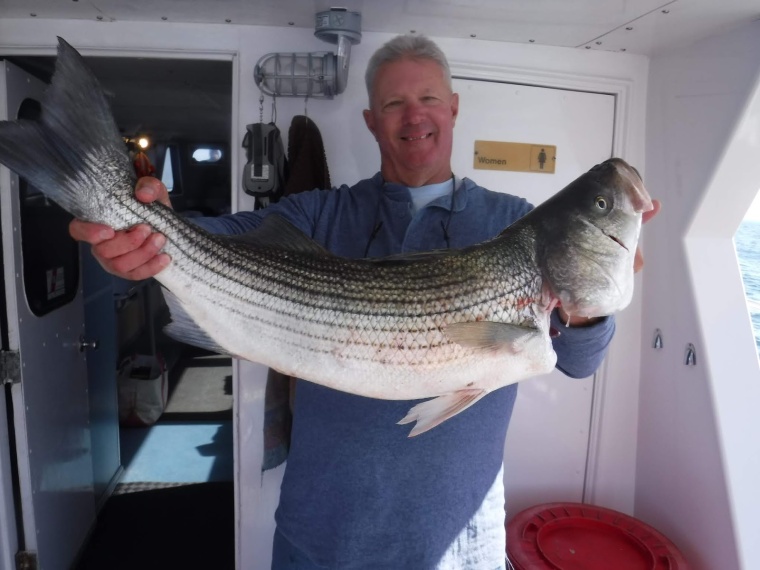