Theeast wind came up quickly this morning and was even stronger than expected — manking most fishing at least uncomfortable at best.

After the great bite of big stripers that Capt. Rob Semkewyc had Sunday on his Sea Hunter from Atlantic Highlands, he wanted to tough it out despite the weather — but the wind was even worse than forecast so he sent the anglers who showed up home. 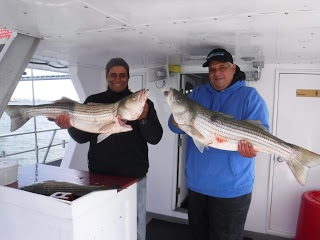 The forecast for Tuesday is better, though small craft warnings are posted into the afternoon. The east wind is supposed to drop down to 10-15 knots before increasing later. Wednesday looks much better with a switch to 10-15 west before gusting to 25. Thursday looks best with west 10-15.

The Jamaica from Brielle will run a 6:30 a.m. striper trip on Wednesday, and a canyon trip at 7 a.m. Thursday. They caught a couple of big bass Sunday in poor conditions. Call 732 528-5014 for reservations.

Capt. Stan Zagleski had  a bunch of regulars aboard Elaine B. II from Bahrs in Highlands to release lots of blackfish up to 6 pounds on green crabs while keeping the one presently allowed. Some keeper sea bass also hit the crabs, but when soft bait was used there was a problem with spiny dogfish. They sail daily at 7.

Capt. Ron Santee got a birthday present Sunday when he put his fares on the Fishermen from Atlantic Highlands into big stripers on eels and jigs. Lots of weight was required as the current was at three knots all day. There was nothing under 30 inches, and Rick DeVito won the pool at 39.8 pounds.

The surf was very rough. and I didn’t get any reports from this morning. I tried Point Pleasant Canal briefly without seeing anything caught. Grumpy’s Tackle in Seaside Park weighed a 33-inch, 13.75-pound bass that Ben Allison caught over the weekend on a plug at IBSP.