As noted in the headline of a previous  blog, the fluke season ended with a whimper as it appears most of the larger fish had already moved offshore to their spawning grounds on the edge of the continental shelf. Party boat skippers had such poor results toward the end that most seemed content to move on from their major source of income.

The Sea Hunter from Atlantic Highlands reported only a couple of keepers and not many shorts on the last day.  Capt. Rob Semkewyc is taking some time off before starting striper fishing later in the month.

Also at that port, the Sea Tiger II reported one keeper fluke Friday afternoon, two Saturday morning, and one that afternoon. That was quite a contrast to the 1/2 to full bucket catches of porgies (see photo below) now  being taken on half-day trips.  They report most of the scup are over the 9-inch minimum, and there are some blowfish plus lots of sea bass that have to be released. 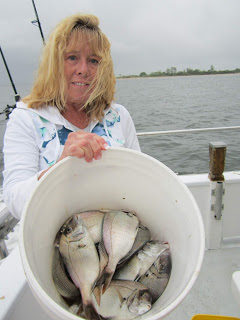 The Atlantic Star is also fishing for porgies half-days, and the Fisherman is sailing for them on their usual schedule. Prowler V has also switched to porgies, but won’t be fishing again until Thursday or Friday due to the continuing east winds that have resulted in small craft warnings through Tuesday. The Angler is in the ship yard prior to Coast Guard inspection.

The Mimi VI from Point Pleasant will be sailing open for bottom fishing Friday and Saturday at 7 a.m. — and has scheduled Hudson Canyon tuna trips on Oct. 8 and 18. Call 732 370-8019 for reservations.

The surf has been rough in the gusty east wind, but conditions were fine this morning at the Point Pleasant Canal. Many of the regulars were casting jigs, and I was among the fortunate few who caught a bluefish in the 5-pound class. I saw only two others caught while I was there.

At Seaside Park, Betty & Nick’s reported surfcasters were “crushing” blues in the 3-to-5-pound class plus a few to 8 pounds Sunday from the bathing beaches to the inlet.

John Avery, one of my blog followers, finished up the fluke season in his small boat in sheltered Oyster Creek Channel of Barnegat Bay where he was surprised to catch a lizardfish on a small Hogy epoxy jig. He thought that was an usual fish to see up here, but they’re actually common at this time some years. Indeed, I remember catching them while a kid with my cane pole from docks in Merrick, Long Island as I was seeking snappers. Joe Melillo, at Castaways Tackle in Point Pleasant told me that the last time he was able to catch large stripers on plugs during the day in Point Pleasant Canal was when the bass were attracted by lizardfish many years ago.