Little tunny are building up in waters closer to shore, and that gamest of our inshore species should be providing lots of opportunities into at least October.

In case that name isn’t familiar to you, little tunny is the proper common name for what most people refer to as false albacore. Like the albacore, the little tunny is a member of the tuna clan within the mackerel family — but it has little resemblance to the long-finned albacore which is a canyon species that rarely even moves into the mid-range tuna grounds. There’s also a world of difference in eating quality between those species.

Little tunny are just as fast as albacore, and a great fish to catch on light tackle. Most are released, but that’s often difficult to do because they literally fight to death. Though I haven’t heard of surf reports yet, little tunny should give surfcasters a thrill if they can get a small metal ahead of them and reel as fast as possible.

The Big Jamaica from Brielle got into little tunny today along with bonito plus some chub mackerel and blues. The pool went to a Maryland angler with a 14-pound little tunny.

The Golden Eagle from Belmar got into good bluefishing as some fares had limits of 2-to-6-pounders. Be sure to bring spinning tackle for best results.

Though the ocean still had a swell today, Capt. Stan Zagleski of Elaine B. II from Bahrs in Highlands said it was perfectly fishable for a mix of shorts and keeper fluke.

The Fishermen from Atlantic Highlands made it out to the ocean and had decent fluking with a pool fluke of 6.9 pounds — but some big sea bass had to go back as that season is closed again.

The Big Mohawk from Belmar waited another day for conditions to improve, but will sail for fluke at 6:30 Sunday morning. Light winds are forecast the next two days.

Capt. Dave De Gennaro has been doing well with a mix of king and Spanish mackerel plus bonito and dolphin at Barnegat Ridge with his Hi Flier from Barnegat; On Sunday he’s planning to seek tuna at 2 a.m., but may return to the Ridge at the same time on Labor Day.

Grumpy’s Tackle in Seaside Park weighed in fluke up to 4.85 pounds and blues to 1.4 pounds that Phil La Grossa Jr, and his brother Nick caught on their father’s boat this week. 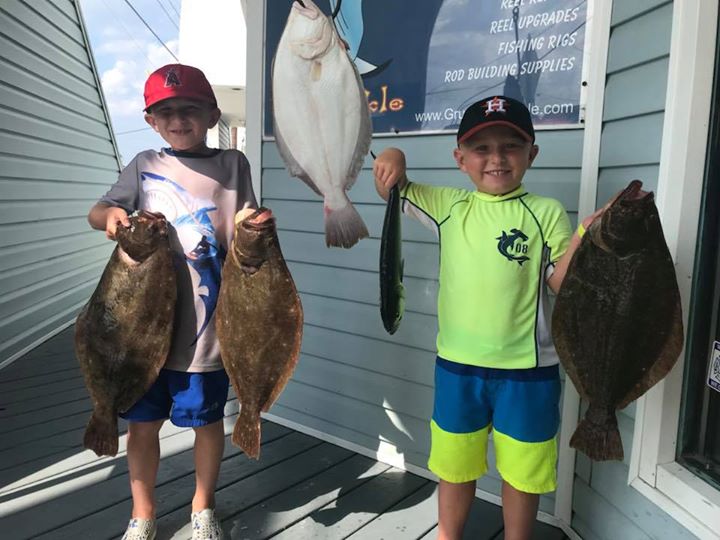