Today’s west wind was just what the Ocean Explorer from

Belmar wanted, and they reported red hot fluke fishing with lots of keepers up to 8 pounds. Pink and white were the best jig colors once again.

Fluke reports from Atlantic Highlands weren’t as good. Capt. Ron Santee of the Fishermen said a hard south current combined with the west wind to create rough conditions where they had fished yesterday. A move to rocky bottoms resulted in calmer waters and a decent pick.  Yesterday was much better as a 6.8-pounder was boated before Capt. Ron Sr. added a 6.2-pound fluke. The skipper’s son, Ron Jr., boated a 5-pounder and most fares did well. Capt. Rob Semkewyc wasn’t happy with the west wind that was harder than forecast, but ended up with a decent catch on his Sea Hunter.

Small blues provided Shore party boats with a shot of good jigging action. The Golden Eagle from Belmar then went offshore to add chub mackerel and some sea bass.

The Jamaica from Brielle got into small blues yesterday morning, but they were hard to catch. As a result, they set up for chumming offshore to load up on chub mackerel plus a few ling and sea bass — while dolphin also invaded the slick. 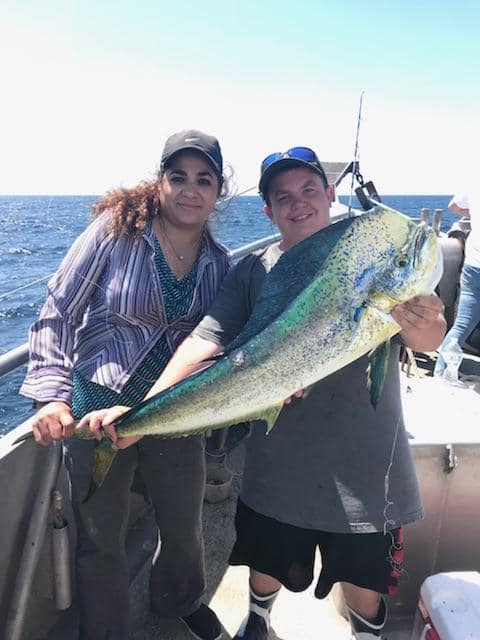 Adam La Rosa is looking forward to the MidAtlantic Tournament in Cape May, where the Canyon Runner fleet from Point Pleasant has been in the money four of the last five years. They have only one charter date left in August for chunking yellowfins

Mike Barrasso of Bay Head went to his local beach at 3:30 yesterday afternoon and was finally able to reach surfacing bonito to catch not only one –but a doubleheader on a hammered metal and a Joe Melillo Castaways Tackle teaser.

Outdoor writer Nick Honachefsky has caught bonito from the local surf before, but never a Spanish mackerel until this morning. After a series of mishaps at Point Pleasant, he made a blind cast before leaving and broke the ice.

Vinnie D’Anton fished north of Manasquan Inlet and was at the right place when some stripers started rolling. He released four up to 24 inches on a Chug Bug, and switched to metal when a school of small blues zipped by to catch one.