With 324 boats fishing the final day, there’s likely to be some changes in the distribution of  the millions involved in the White Marlin Open out of Ocean City, Maryland. I’ll have the final results later tonight after the weigh-ins have been completed.

The big winners at this point would be the 83-pound white marlin that took over first place yesterday for Gregory Giron on Underdog for a projected $2.6 million — and the 881-pound blue marlin boated by Joe Rahman of Wanaque, N.J, on his Auspicious for a projected $700.000. Actually, the tuna winner could be in  the same area, depending on how many Calcuttas the eventual winner has entered. Gary Sansburry took the lead yesterday at just 75.5 pounds on Buck Shot .

Inshore anglers were treated to another fine day. The Golden Eagle from Belmar reported a real variety as they started off with small blues, then had some Spanish mackerel before going back to blues plus chub mackerel, sea bass, ling and two 5-pound fluke. On  Thursday they also had a bonito over 5 pounds and a pollock, The Ocean Explorer at that port had good fluke fishing with many limits for those jigging Gulp baits.

Capt. Dave De Gennaro has been catching tuna on offshore trips and sharks at Barnegat Ridge with his Hi Flier from Barnegat. He’s open over the weekend, and I’ll have more about his fishing tomorrow.

Allen Riley and John Mazzeo went from South Plainfield to Sandy Hook this morning along with Duke Matero of Piscataway. They found calm seas with so many rainfish in the wash that the small waves were dumping some on the beach as they tried to evade snappers. in the 78 degree waters.  John caught a couple of short fluke on Gulp, and Allen lost a keeper fluke in the wash when it  gave up its hold on a live snapper.  Duke caught a mystery fish which they thought might be a pilotfish. It’s pretty hard to identify from the photo, but it might be a banded rudderfish.

At Atlantic Highlands,, Capt. Ron Santee said he finally had another banner day on the Fisherman as the Columbia Bank charter had both fluke action and quality. Marty Herrman of Branchburg took the pool with an 8.22-pound fluke as he limited and added the two sea bass allowed. Capt. Rob Semkewyc of the Sea Hunter  had a similar report of good fluking.

The Elaine B. II from Bahrs in Highlands has also had good fluke fishing this week — as shown below. 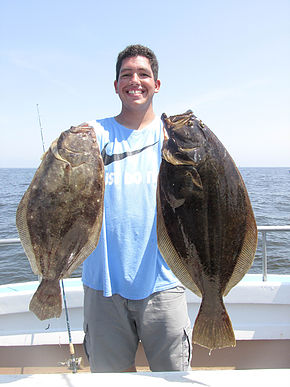 Capt. Vinny Vetere of Katfish Charters in Great Kills continues to do well with stripers. A father and son team caught bass up to 26 pounds today among lots of  big smooth dogfish. He’s open for Saturday.

Vinny D’Anton fished north of Manasquan Inlet this morning, and came across a spot where stripers were rolling in schools of rainfish. He managed to release a 27-incher and a small bass on a Chug Bug before it was over. 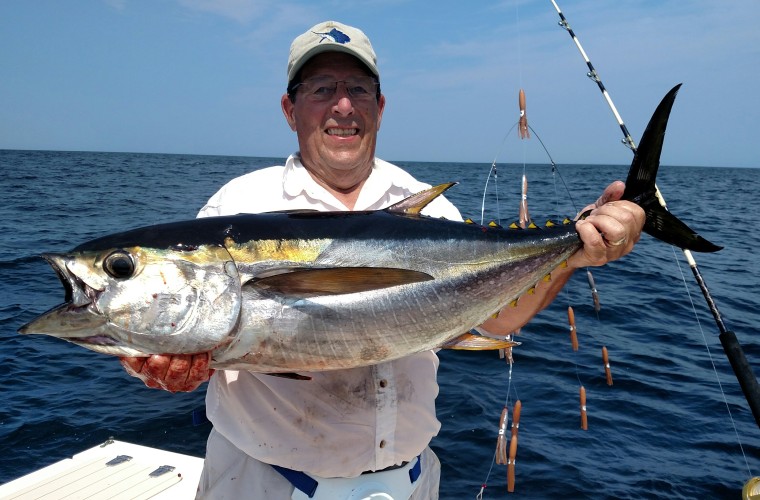