Tank Matraxia of Lyndhurst is an enthusiastic fluke fisherman who charters the best skippers in the northern N.J. area to pursue that species, but he hadn’t been fortunate enough to catch a doormat even though he did hook a 9 1/2-pounder last year.  Though casual anglers often refer to any large fluke as a “doormat”,  serious flukers know that the only fluke entitled to that designation has to make double digits in order to join that exclusive “club” — just as striper anglers often spend a lifetime trying to catch a 50-pounder to join the exclusive top rung of the sport in the “’50-pound club”. 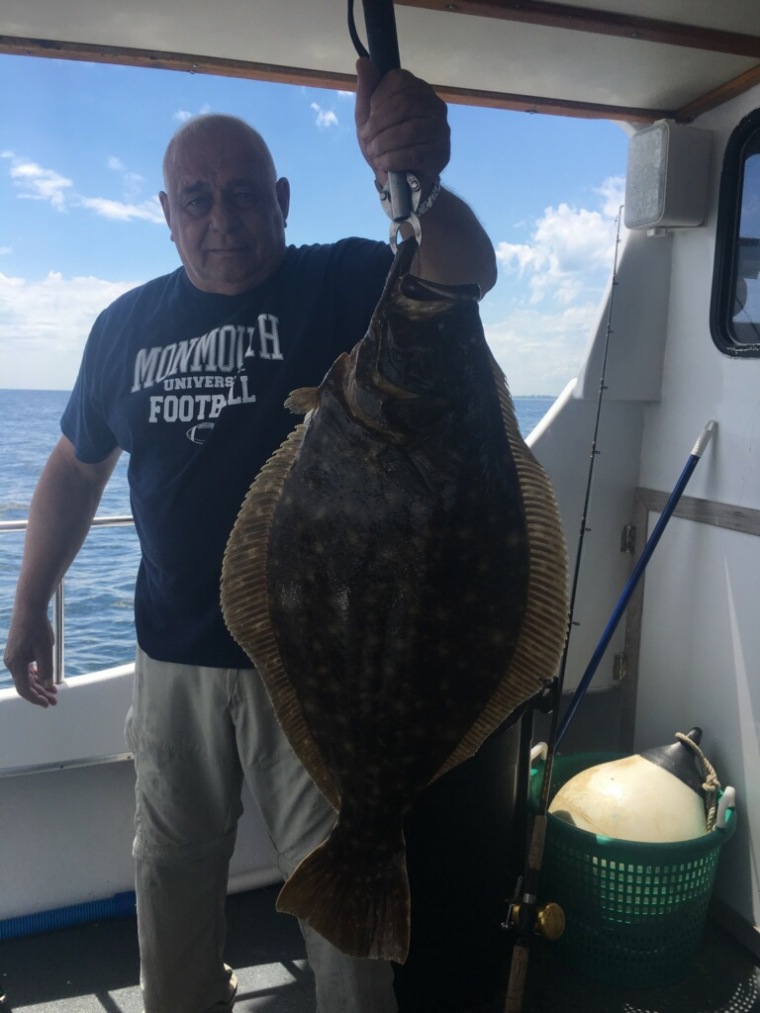 Ironically, Tank broke through during a poor year for doormats. I haven’t had a single doormat report from the Raritan Bay party boat fleet as yet, and only one from a Shore party boat — on the Capt. Cal from Belmar last week. As of the July 12 edition of The Fisherman magazine , their coastal (N.C. to Maine) Dream Boat contest for subscribers only had six doormats entered up to a 12.63-pounder from Long Island. Tank’s fluke probably would have fit into fourth place at this time

Matraxia was fishing today with Capt. Chad Hacker on Tagged Fish from Highlands and not doing very well as they started off Coney Island before moving back to rough bottom near Sandy Hook.  Tank had been bucktailing, but switched to a bottom rig with Gulp and a fish strip when he literally dropped it into the mouth of a fluke that weighed just short of 12 pounds on the BogaGrip. He was going to get an official weight at  Julian’s Tackle in Atlantic Highlands, but the mate filleted the doormat on the way in.

Tank’s so proud of that fluke that the blog printed the photo twice!

Capt. Ron Santee of the Fishermen from Atlantic Highlands said it was not only a beautiful day on the water, but fluke fishing was better with action all day. The pool fluke went 5 3/4 pounds, and Santee also put his fares into some sea bass.

The Jamaica from Brielle reported very good Tuesday variety fishing for chub mackerel and sea bass. Vladimir Savon of  Fair Lawn won the pool with a 4-pound sea bass Some bluefish have been reported offshore, and will hopefully move inshore soon.

The Golden Eagle from Belmar also had very good action Tuesday with sea bass and mackerel plus some fluke and ling as well as “tommycod” which I expect were actually spotted hake as tomcod are virtually unknown in offshore waters.

Vinny D’Anton of Wall fished the surf to the north with his Chug Bug to catch four school stripers. I found very little water in the Manasquan surf, but hooked a bass that hit a Chug Bug in the wash — but got off.