One thing everyone could agree on today was that it was HOT! Unfortunately, there wasn’t a repeat of the hot Saturday fluking in Raritan Bay.

Capt. Ron Santee of the Fishermen from Atlantic Highlands said there was little drift, and power drifting didn’t help much this time.  June Benson started the day off right with a 5 13/16-pound fluke, and then added an 18-incher. However, only a few managed multiple keepers in contrast to yesterday on the Fishermen when all the fluke were at lest 19 inches.  The Sea Hunter had a similar report of decent fluking over the weekend despite the conditions.

John Vanderstad of Pompton Lakes had this pair of 6-pound fluke Saturday on the Elaine B. II from Bahrs in Highlands. 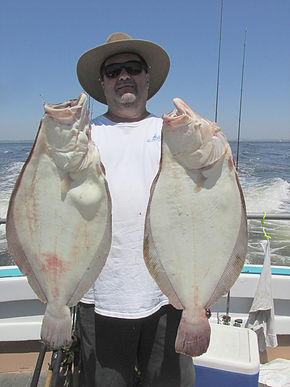 The Angler from Atlantic Highlands  settled their monthly pool yesterday as John Brock of Clifton held on all month with his 6 15/16-pounder to win $1,560.

The Canyon Runner fleet from Point Pleasant had a last minute cancellation, and the 60-foot Ritchie Howell  is open for the July 2-3 overnighter. Yellowfin trolling has been hot as 72 were caught Saturday though the boats only trolled for seven hours.

Mark Roy ran his Release Me from Raritan Marina in Hazlet out to the Chicken Canyon area yesterday and got into 50-to-60-pound bluefin tuna on pencil poppers. He and his crew caught four casting, and trolled a yellowfin on a spreader bar. A trip to the Hudson Canyon was fruitless, and overnighting only produced a brown shark.

There were no reports from the bluefish boats as of the time this blog was written.

It was delightful being on the Spring Lake surf this morning, but the only small striper I saw was caught by a fluke fishermen on Gulp. I switched from a popper to a Storm Searchbait jig to break the ice with a small fluke. Vinny D’Anton said he caught a short bass at Belmar on a Chug Bug, and Frank Manzi managed a 15-inch fluke on sand fleas at Spring Lake.

Bob Matthews at Fisherman’s Den in Belmar Marina is still raving about that 13 1/4-pound fluke from Shark River as reported here this week. Henny Green and Marty Westerfield have been catching lots of keepers in the river up to 4 pounds. Matthews has seen the first very small snappers in the river.