Frank Criscola’s Crisdel from Brielle Yacht Club was posting a sweep in the ongoing Manasquan River Marlin & Tuna Club’s Jack Meyer’s Trolling Tournament after boating 13 yellowfin tuna Wednesday in Toms Canyon, but that lead may not last through today.

The yellowfins weighed in by Crisdel were of 48.65, 56.55 and 43.85 pounds. However, Capt. Chris Di Stefano heard that My Christine had boated a bigeye today in Wilmington Canyon estimated at 135 pounds. Provided My Christine arrives in time this evening, that bigeye will be the new leader.

The MRMTC also has their first annual Bluefin Tournament in which most prizes are for the biggest bluefin under 73 inches. There are Calcuttas for bluefins over 73 inches as well as for the largest yellowfin and dolphin. That contest started June 28 and runs to July 1.

The Canyon Runner from Point Pleasant has had limits of yellowfins on the last six canyon trips. They have had a last minute opening for a July 5-6 overnighter  on the Viking 48. The entire boat is available — or else they’ll take open boat reservations. Call Adam La Rosa at 732 272-4445. 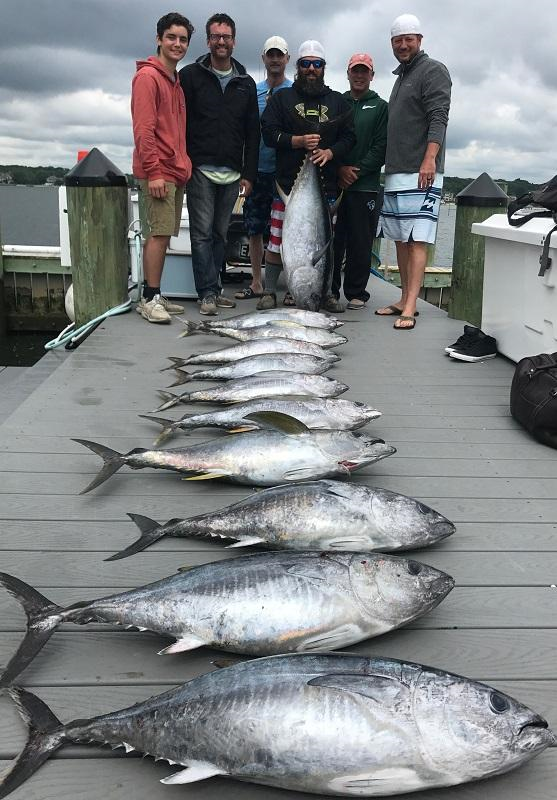 Big fluke were also in the news today. Capt. Rob Semkewyc reported a decent pick of keepers aboard his Sea Hunter from Atlantic Highlands that included their largest of the season — a 9. 54-pounder by John Corvino from the Catskills.

There was also a Facebook posting of a 13 1/4-pound doormat at Fisherman’s Den in Belmar Marina. That giant hit Gulp fished by Kevin Newberg of Avon in Shark River. If he’s a Fisherman magazine subscriber, that fluke would take over first place in the coastal Dream Boat Contest.

Capt. Vinnie Vetere reported a limit of large stripers up to a 44-pounder trolling in the Hudson River with his Ho-Jo;s from Katfish out of Great Kills. He’s open on Saturday.

Tom Fote reports there was a decent turnout at last night’s Bluefish Public Hearing in Toms River. I had intended to make that hearing, but was tied up all afternoon in my wife’s purchase of a new car and got back too late. Fote said a few party boat captains testified, and everyone seemed to oppose any changes until a new stock assessment is available.

Bluefishing has been very tough this year so far, except for a couple of localized spurts. There was no change in that today as Capt. Dave Riback of the Queen Mary from Point Pleasant frankly reported “Friday was very nice on the water, but that’s the only good news.” He’s chartered on the mornings of June 3, 8, 15 and 21,

Allen Riley of South Plainfield fished the Sandy Hook surf for fluke with plastics under ideal conditions this morning to catch four and a half short fluke. The “half” was actually a mere 10-incher that managed to inhale a 4-inch Gulp Swimming Mullet.

I cast a jig in Shark River to catch a small striper within a few casts — and never got another touch. Vinny D’Anton later walked to another area and released four of those small bass\ on the Storm Searchbait jig.

giant was caught on Gulp in Shark River by Kevin Newberg of Avon.