It’s been a poor season for bluefish, but there was some hope this morning when the Golden Eagle from Belmar got into jigging blues ranging from 4 to 10 pounds. Up to this point, there’s only been off-and-on ocean jigging north of Shark River for small blues except for one short-lived shot of the bigger choppers that used to provide the basic charter and party boat action all summer. As it’s been so far, bluefish boats have had to switch to sea bass during the day after any early bluefish bite in order to send their fares home with some fish. However, that sport has been getting tougher as shorts remain abundant while keepers are a different story. The Capt. Cal II from Belmar has switched to fluke, which are showing signs of improving as ocean water temperatures rise.

The early inshore run of big blues was a flop after a few years when river and bay fishermen had great sport with heavy blues. That problem seems to affect the whole coast as there have been only three entries so far with the 15-pound minimum in The Fisherman’s 2018 Dream Boat Fishing Challenge which covers from North Carolina to Maine.

By the way, I only this week realized that The Fisherman has swapped out yellowfin tuna as one of their eligible species for something the average fishermen is much more likely to encounter — the sea robin. The ten spots in that category have been filled with a minimum size of 2 pounds. The leader so far weighed 3.9 pounds and came from Long Island  — as did all of the other entries.

Capt. Rob Semkewyc was looking forward to a south wind today for a good fluke drift on his Sea Hunter from Atlantic Highlands, but it was actually SW, and didn’t help at all until it switched to SE. His anglers still picked away with fluke up to the pool fish of just under 5 pounds.

Allen Riley of South Plainfield said the sunrise was the only feature of this morning’s Sandy Hook surf fishing. Lures produced nothing in the calm, 67-degree surf, and only a skate ate the bunker he also fished as crabs feasted on that bait.

Vinny D’Anton of Wall found Shark River to be dead this morning, but was then pleased to release two stripers up to 24 inches that hit his Chug Bug in the local surf. I couldn’t hook a fish in Point Pleasant Canal this morning, though I did have a few bumps. A scattering of small blues provided most of the action for other anglers.

Kevin Kuriawa fished Raritan Bay on Father’s Day with his 97-year-old dad plus his brother and son. He was only 1 1/2 miles from the dock when the day became even more special as he hooked a 26.5-inch, 8-pound fluke. 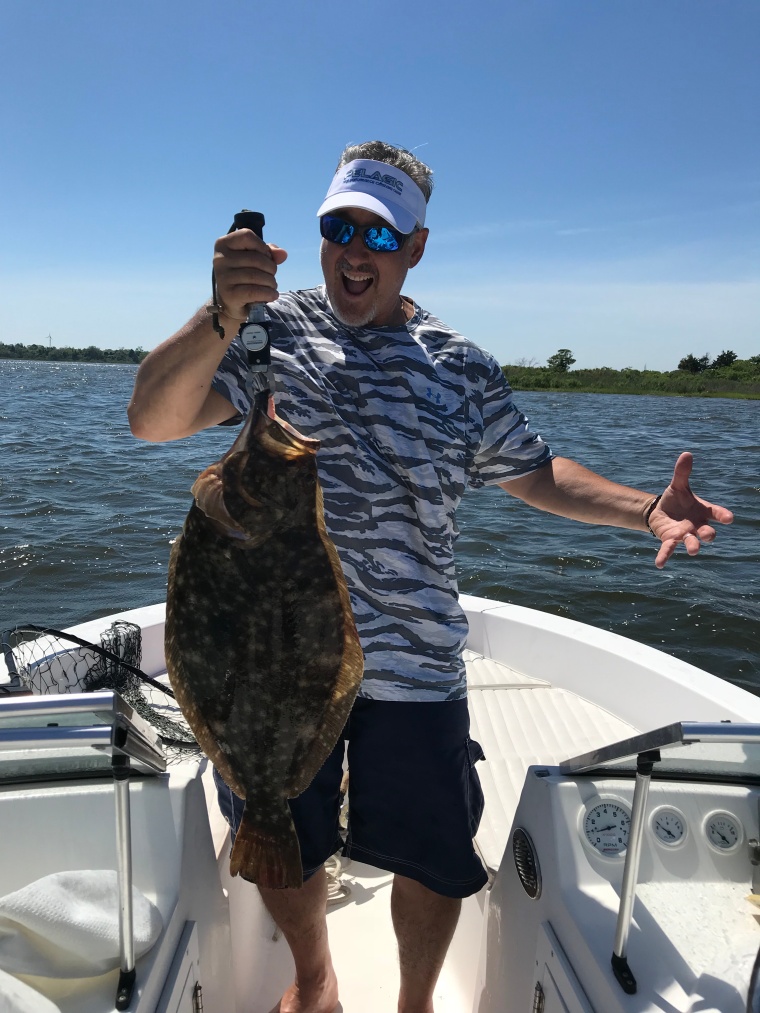