Surfcasting for sharks at night has been catching on the last few years, and Grumpy’s Tackle in Seaside Park notes that fishing seems to be getting underway with several sand tigers  reported recently. Daytime fishing was slow yesterday with only one striper and one blue weighed in. There are some fluke in the surf, with Colton Connell bringing in a 25-incher that weighed 3.55 pounds. Striper weigh-ins recently were topped by Annalee Nelson with a 39-inch, 19.20-pounder on clams in the surf — along with a 41.5-inch, 21.15-pounder the same way by John Radice.  Betty & Nick’s Tackle reported big blues were in the inlet Saturday.

Capt. Dave De Gennaro had no hits trolling for big stripers Friday with his Hi Flier from Barnegat, but while finishing up by casting soft plastics in Barnegat Inlet for 2-to-4-pound blues on 10-pound spin,  he was surprised after the tide turned by stripers up to 12 and 21 pounds.  De Gennaro will be looking for more of them, and is also taking along some shedder crabs and sandworms after getting reports of weakfish in Barnegat Bay. He also hopes to get offshore to the tuna that are edging closer — but only when the weather is right.

Capt. Stan Zagleski had tough fluking conditions today with his Elaine B. II from Bahrs in Highlands, but his regulars jigged some better fish topped by a 7-pounder for Mike Schmidt of Cranford. 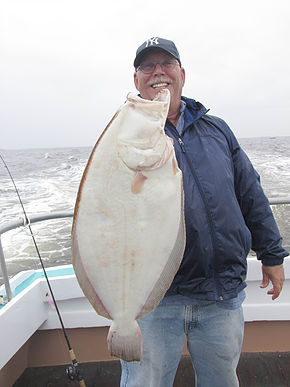 Allen Riley and John Mazzeo from South Plainfield worked the Sandy Hook surf with bunker Thursday morning for lots of big sea robins and only one skate. John also released a 22-inch striper, and Allen hooked a 5-pound blue.

Fluking conditions in Raritan Bay were tough today, but Capt. Rob Semkewyc of the Sea Hunter at Atlantic Highlands said he did much better than on Saturday as a few limits were taken. Colin Bennett (10) boated a 5-pounder to take the pool while his grandfather limited.  Capt. Ron Santee said he fought wind against tide with the Fishermen and stayed later as the fishing improved.

At Belmar, the Big Mohawk reported very good sea bass fishing with many limits. Jigs produced the bigger fish. The Golden Eagle even had some sea bass limits on the Saturday afternoon trip.

The Queen Mary from Point Pleasant had lots of sea bass today, but Capt. Dave Riback noted that keepers are getting harder to come by. The Sunday and Monday magic hours trips were cancelled due to ocean conditions.

There were no bluefish reports today.