The big migrating stripers moving up along the Shore after spawning in Chesapeake and Delaware bays, provide possibly the best opportunity to join the elite of striper fishing with a bass over the coveted 50-pound mark. Though those fish lost a lot of weight after dropping their roe, they regain weight quickly by feeding on bunkers.  That’s what provided the 30-inch girth on only a 48-inch bass to get it over 50 pounds for John Wasnesky of Freehold when he trolled a Tony Maja #4 bunker spoon off Asbury Park last week with Capt. Jim Freda on Shore Choice out of Point Pleasant. 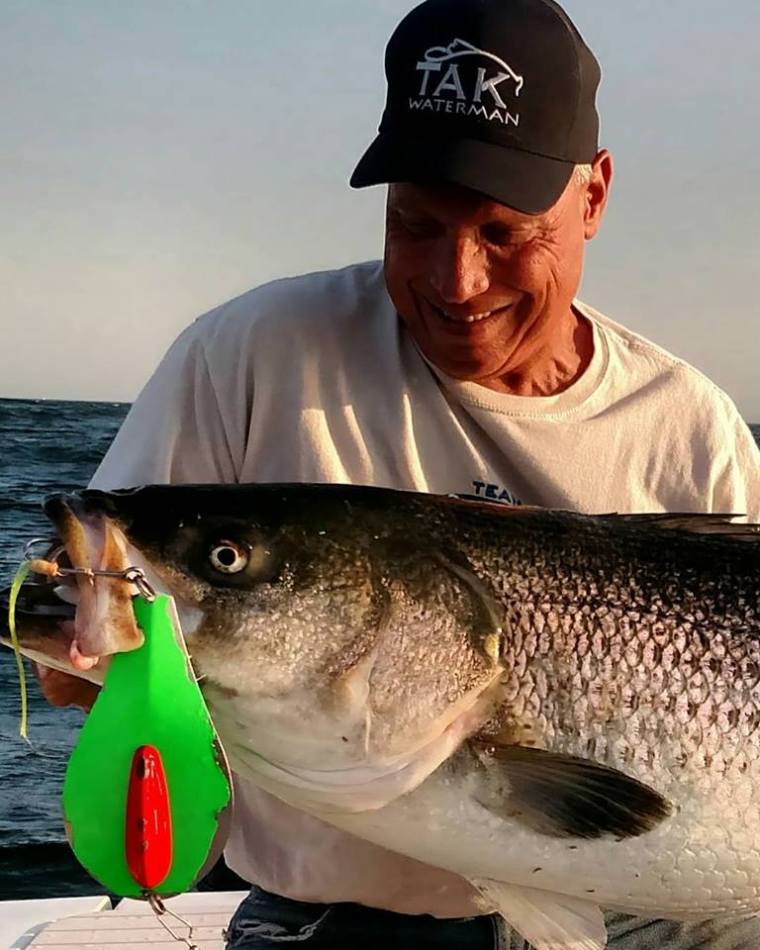 That bass was released, but you can get a good idea of the weight by using the formula — length to fork of tail times girth squared divided by 800. Remember to use the fork length measurement , as the formula was developed in the old days when that was the standard for length measurements.

While going through some old JCAA newsletters last night, I read a Tom Fote column on striped bass in which he noted that trophy stripers are usually about 25 years old; At that time the great 1993 year class was the hope for the future — and Fote said he was looking forward to catching and releasing those 25-year-old fish from the 1993 year class in 2018 — “God willing”.  Tom, your time is here!

Capt. Vinnie Vetere had a great Memorial Day weekend except for the rain-out on Sunday as lots of big bass were trolled on his Ho-Jo lures from Catfish out of Great Kills — including a 52-pounder. Rockfish from N.Y had a 54-pounder on one of Vetere’s Ho-Jos.

Today’s great striper catch wasn’t a 50, but a 41-pounder fought on fluke tackle by Bob Evans of Flemington from Elaine B.II out of Highlands after it was hooked on a Spro rig.

Capt. Stan Zagleski said fluke fishing was also good. That was also the report from Capt. Ron Santee on his Fishermen from Atlantic Highlands as he made the most of the morning incoming tide that produced the 7-pound pool winner.

The Golden Eagle from Belmar picked at small blues before adding sea bass in the afternoon. Miss Belmar Princess ran north from Shark River to jig small blues, including some limits before switching to sea bass and fluke.