Striped bass catches haven’t been up to what we have come to expect in May so far, but bigger fish are becoming more common — and there are finally some blues in the ocean to fill in the holes.

The Golden Eagle from Belmar jigged a few blues early before moving to where they had seen stripers on top Sunday. Only two were boated, but one was a 46-incher. The Queen Mary from Point Pleasant reported good morning jigging for blues.

Tom Fote of Toms River had a charter with Capt. Fletcher Chayes today on his Two Rivers Charters from Highlands. Fote said they had stripers hitting live bunkers on top both in the ocean and bay, but Eleanor Bohanek caught the only bass of about 14 pounds.

Capt. Vinny Vetere said it was too rough Saturday off Sandy Hook to fish there, so  he burned a lot of fuel in his Katfish out of Great Kills to troll his Ho-Jo’s in L.I. Sound between Stepping Stones and Execution Rocks Lighthouses for a good striper catch — and did the same thing Sunday.

Though Sunday’s weather was good for the Governor’s Surf Fishing Tournament at Island Beach State Park, Capt. Jim Freda said the southwest wind made for tough fishing as he only saw a few blues caught. The D.E. P. hasn’t posted results. and even a call didn’t produce them.

Freda tried trolling for stripers with Shore Catch from Point Pleasant  off Manasquan Inlet when he returned, but never had a hit on bunker spoons or Mo-Jo’s.  Freda released a bass of about 38 pounds Thursday on a Tony Maja bunker spoon.  Bud Mc Arthur of Brick joined a  friend today for a run up to Asbury Park and then down to Seaside. No bunker schools were spotted, and they never had a hit trolling. He only saw a couple of blues trolled among boats to the south where the water was 55 to 57 degrees, .

Capt. Rob Semkewyc said Sunday’s bait fishing for stripers from his Sea Hunter out of Atlantic Highlands was slow, but they picked some bass including a 33-pounder. Bass came up in the afternoon, but most of those hooked broke off. Monday produced a better bite on bait, including two 30-pounders that tied for the pool. 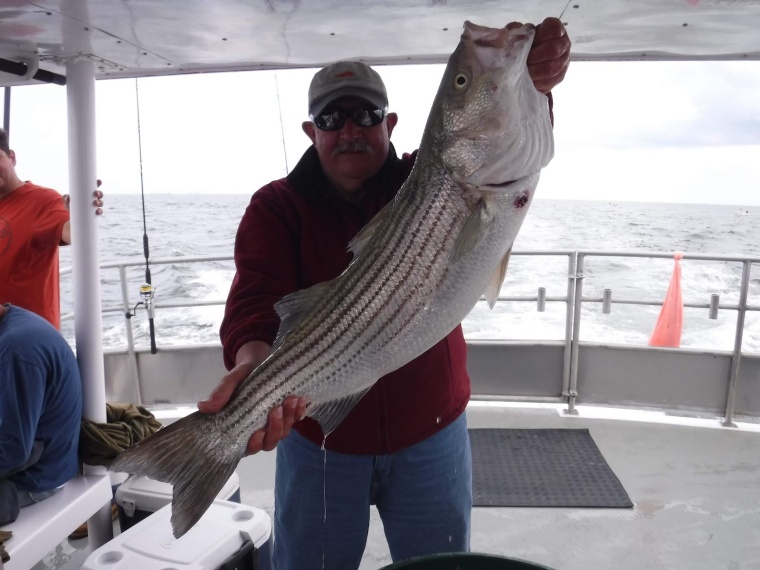