Everyone knew the sea bass season in New Jersey was set to open today after the Marine Fisheries Council voted for regulations pre-approved by the ASMFC last month. All that remained was for the DEP commissioner to sign off on those regs, but one angler called me this morning to say that hadn’t happened — and he didn’t know if the season was really open. I checked the NJ DEP through the internet, and couldn’t find anything about sea bass before making a call which was returned this afternoon informing me that the commissioner had signed off on the sea bass (and fluke) regs yesterday. If you can find them, it’s legal to catch 10 at a 12 1/2-inch minimum through June 22.

Though I had no boat reports, Bob Matthews, at Fisherman’s Den in Belmar Marina, reported the Big Mohawk, Ocean Explorer and Capt. Cal all had good sea bass catches. That wasn’t the case with Bud Mc Arthur of Brick who fished with Capt. Niff on Audrey Sue from Brick as they worked a wreck and rock piles inshore and offshore to catch only a few short sea bass. The surface water temperatures were from 54 to 55 degrees everywhere they went, and there wasn’t even much bergall life on bottom. Party boats were fishing well off the beach.  They finished up with some striper trolling, and only marked a little bait.

Yet, there may be some good news on the overdue ocean stripers. The Golden Eagle from Belmar reported catching three bass over 20 pounds and up to a 30-pounder on jigs and crocs while losing another on a beautiful day at sea. Though not specified, that indicated the big bass were caught in the ocean rather than Raritan Bay where the fleet has had to fish for any shot at a striper.

Capt. Rob Semkewyc said fishing in the bay was about the same as yesterday on his Sea Hunter from Atlantic Highlands with good short action and a few keepers.

Capt. Vinnie Vetere netted a load of bunkers and had good action right away before it dropped off to a pick on his Katfish from Great Kills. He then tried other areas on his way back to Raritan Bay to no avail.

At Seaside Park, Grumpy’s Tackle weighed the first striper caught by 9-year-old Alex Taleot — a 29-inch, 8.4-pounder on clam in the surf. There was also an 11-pound blue on bunker from a dock, and small bass in the surf on bait. A keeper bass was reported to have been released on a bucktail.  Betty & Nick’s reported that a young angler from Toms River  North H.S. caught small bass in the surf plus a black drum.

I spent some time fishing locally and protecting my lures from any fish that might have been in Manasquan River, the Bay Head surf and Point Pleasant Canal. 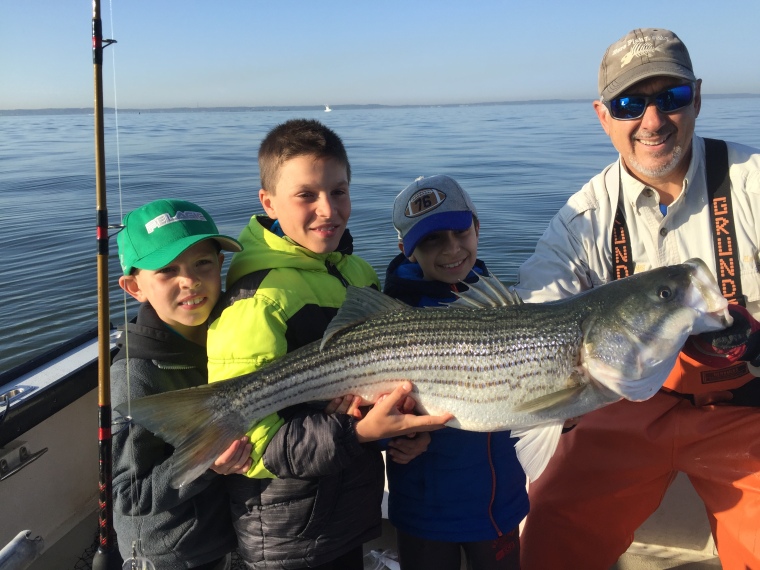