The ocean swell was big enough today to make Shark River Inlet so rough that the Big Mohawk turned around and returned to its berth in Belmar.  They’ll give it another try at 7 a.m. Friday — and at 6:30 am. from Saturday through Monday to finish out the spring N.J. blackfish season which closes at the end of the month.

Bob Matthews reports from Fisherman’s Den in Belmar Marina that winter flounder still haven’t produced much action at the docks there, with more fluke taking the baits. Small stripers are being caught in the surf. However, Jim Louro of Spring Lake said he gave up quickly this morning due to the big swell. The forecast for Friday is for moderate east winds with small craft warnings plus rain before west winds should produce better conditions over the weekend.

The Sea Hunter got out into Raritan Bay from Atlantic Highlands this morning, but Capt. Rob Semkewyc said it was just a pick of shorts with an occasional keeper that kept him on the first drop for the rest of the tide rather than taking a chance by moving from the modest bite. He noted that trollers were doing better.

Capt. Joe Massa made a short Wednesday evening trip with John D’Andrea on My Three Sons from Morgan Marina and had good trolling in greater depths than the fleet has been fishing. They caught five bass of legal size, which had sea lice on them, plus two shorts.

Capt. Hans Kaspersetz is back from serving as an observer at a billfish tournament in the Dominican Republic, and ready to start chartering Sheri Berri from Twin Lights Marina in Highlands. If you’d like to fish with Hans and me on that fast 25-foot Regulator, send a e-mail to me at cristori@aol,com. — or call 732 757-5531. 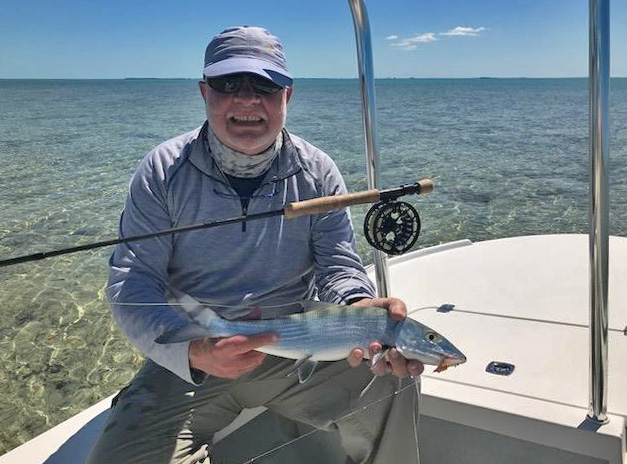 A touch of the tropics. Hank Matri with a Bahamas bonefish on a fly before the release in March