I joined Bruce Hrobek of Billy Bones Tackle in Port St. Lucie and Stuart  this week to fish Miami-area canals for some real exotic fish — Midas cichlids.  That invasive species from Central America is well-established in the clear water canals, and can be spotted before being baited. Though they feed on both plant and aquatic life, the most effective bait is a piece of white bread formed into a ball on a small hook. The strong south wind made it tough to present the virtually weightless bait, but I hooked one of the beautiful fish on my first attempt. It was 11-inches long and weighed 1 1/2 pounds — and I later caught another of the same size.

This was the first Midas, and the second looked like a copy. Both were males with the forehead lump. 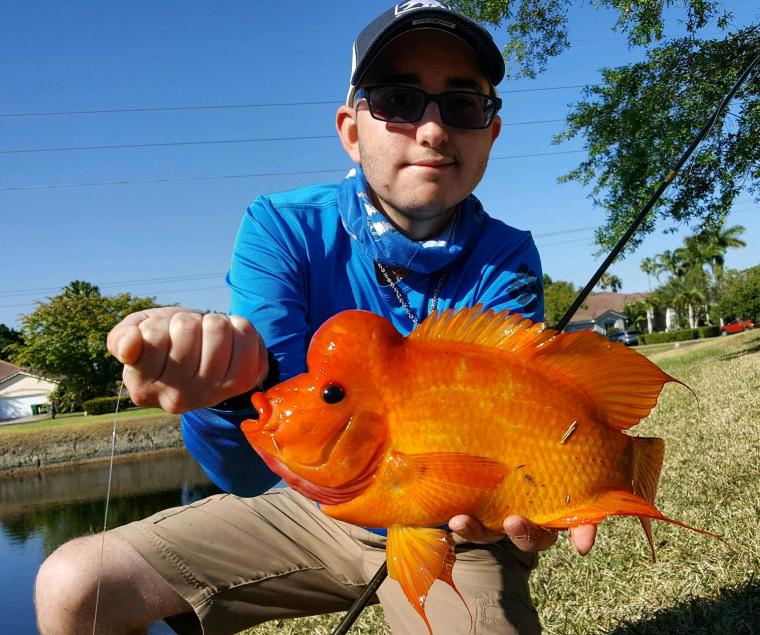 Tanner Hrobek with another big Midas. Tanner also caught a convict cichlid, which has the coloring of a sheepshead with black bars on the sides when it’s a juvenile.

Dr. Johnathon Levy of North London, England, was also with us as some peacock bass were added to the catch with live shiners.   Thanks to Hai Truing, the guide who directed us to these fish. He can be reached at wwwhaitruingfishing.com.

Grumpy’s Tackle in Seaside Park reported the first small stripers being caught on bloodworms in the still cold local surf. Small bass are also hitting worms and small lures in the back bay — and Barnegat Bay is already loaded with bunkers — setting the stage for the spring run of big bluefish.