The Canyon Runner from Point Pleasant has been enjoying great giant bluefin tuna action during their winter stay in North Carolina — whenever the weather permits them to get offshore. Adam La Rosa has been frustrated by so many charters being lost, but when the boat gets out the fishing has been spectacular. Seven giants to over 700 pounds were caught during the two most recent days at sea — March 19 and 24. On the first trip, the Mark Brzozowski party hooked an unheard of quadruple of giants at once after a slow morning. The next trip produced non-stop trolling action not only with giants but also yellowfin tuna and dolphin for the Matt Mozitis party. If you want to get in on this incredible bite, and are willing to wait out the weather, call Adam La Rosa at 732 272-4445. 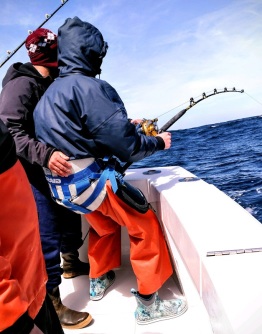 The Tackle Box in Hazlet reports Matt Calabria has been picking away at small stripers in the back of Raritan Bay on bloodworms, and also caught the first keeper there.

Vinnie D’Anton  has been enjoying good light tackle casting from shorelines near his winter home in Sarasota, Fl. Spotted sea trout have been hitting 3-inch Gulp, and he topped yesterday morning’s catch with a 24-incher.