Dave Lilly called this morning with news that he ad trolled an “exotic” — at least by last year’s standard in Raritan Bay — a bluefish.

Lilly went east from Keyport and saw nothing but a lot of boats on a calm morning.  Therefore, he went to the back of the bay where he’s been doing well by trolling 3-ounce Tony Maja mo-jos and caught the blue of about 8 pounds before starting a pick of bass in the 30-34-inch class that got better before he came in later in the morning. Dave said the radio was pretty quiet. He did see bunkers flipping in the back of the bay.

Capt. Chris Di Stefano said a friend trolled mo-jos in the bay to catch 30-inch  bass. He also had a report of cod at Sandy Hook Reef, including a 20-pounder. Another boater had lots of both short and keeper blackfish at Sea Girt Reef. In addition there were 18-22-inch winter flounder and the first showing of big sea bass that are out of season.

Unfortunately, those areas may not be fishable Sunday as small craft warnings are up. East winds of 20 to 25 knots are predicted along with gusts to 30, plus showers.

There were 319 of the finest fishing yachts along the east coast fishing during yesterday’s White Marlin Open at Ocean City, Md., but I only counted five tuna weighed in. At the same time, Capt. Jim Freda of Shore Catch Charters put a party from the Salt Water Anglers of Bergen County into 11 yellowfin tuna from 25 to 55 pounds while fishing the 30 line south of Chicken Canyon and looking for life — whales, dolphins and birds as everything is feeding on sand eels. The 55-pounder  being held by mate Jimmy Freda in the photo, would have been fourth in tuna at the WMO 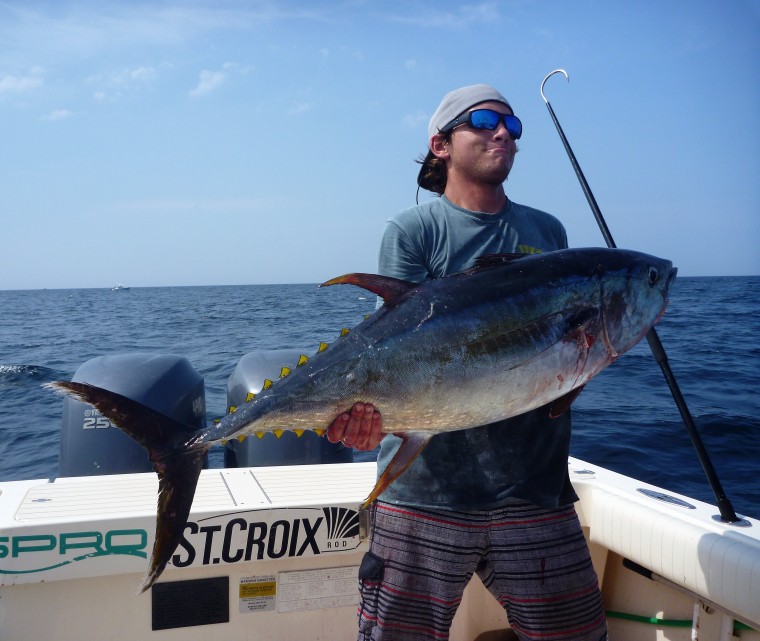 As noted in last night’s late blog, there was one “see if you can beat that” fish weighed at the WMO. The 881-pound blue marlin weighed by Joe Rahman on Auspicious was the sixth largest in the 45-year history of the event.  That blue will be hard to dislodge from a potential; $700.000 payoff.

Other than that there wasn’t much action on the first day despite good conditions.  The three white marlin brought in were all of legal length, but failed to make the WMO minimum weight of 70 pounds.  There were a few dolphin, with a 36-pounder by Doxie Boys taking over first from Halycon’s 30-pounder.  David Rose’s Dialed-In from Spring Lake took over second in tuna at 69 pounds behind the 71-pounder by Rhonda’s Osprey. Makai is third at 61 pounds. Those tuna entries aren’t likely to stand. There are 150 boats fishing today, and I’ll have the results in a late blog.

The Canyon Runner fleet from Point Pleasant reports there’s been a great night chunking bite for yellowfins in local canyons. They have last minute openings for charters or open boat seats on the weekend. Call Adam La Rosa at 732 272-4445.

At Atlantic Highlands, Capt. Rob Semkewyc was disappointed in fluking from his Sea Hunter as only a few keepers were caught. Capt. Ron Santee of the Fishermen noted that while there was good fishing yesterday with no current, it was slower today with a good drift. However, one angler had a 8 5/16-pound pool winner plus a 5 1/4-pounder. Sea bass saved the day for some fares.

At Castaways Tackle in Point Peasant, Joe Melillo had word of a hot bite of fluke over 20 inches yesterday on Sea Girt Reef.  He has green crabs in stock for blackfish in Point Peasant Canal.

Shark River was dead for both Vinny D’Anton and me this morning, and the Belmar surf was no better.