As originally planned, the New Jersey Striped Bass Bonus Program will start on May 15 and run through the end of the year if the allocation isn’t taken.

That program is derived from the state’s commercial share of the stock that isn’t used by the commercial sector since N.J. became a game fish state. Anglers can now apply to the N.J. Division of Fish and Game website for a SBBP permit that allows for one striper from 24 to less than 28 inches. That is in addition to the standard one from 28 to less than 38 inches daily limit.

The N.J. for-hire fleet has been suffering from a shutdown while their bills just keep coming. They’ve proposed social distancing procedures which would allow them to operate, but Gov. Murphy hasn’t publicly acknowledged those requests. However, the federal government is coming to the rescue as the CARES Act has $300 million for the fishing industry that includes for-hire boats.  If skippers can get paid like some farmers do for not planting crops, they may never sail again.

Fred Golofaro of The Fisherman magazine N.Y. edition reports Monday’s fluke season opener in New York was generally slow in cold ocean waters.  The best reports were from shallow inshore waters during warmer ebb tides. Golofaro noted that weakfish and porgies are just getting started in Peconic Bay, and bluefish are late arriving in N.Y. waters– which he hopes is due to the water temperatures rather than a continuing scarcity.

Jim Tynan e-mailed a report about a friend who fished Shrewsbury River from shore below  the bridge over the weekend and caught a 10-pound blue as well as short stripers.

There’s another good day coming up as Friday starts at northwest 10-15 knots before switching to south in the afternoon with likely rain and a gale watch at night into Saturday evening.

With bait & tackle shops closed as non-essential during the pandemic, anglers have been hard-pressed to find what they need for fishing. A partial solution has been curbside pickup in which a call to a tackle shop allows the owner to fill a credit card order to be left at curbside for pickup without any interaction. Yet, on Facebook today there was a message from Charlie’s Bait  Tackle (formerly Ernie Wuesthauf’s shop) in Normandy Beach that they were prohibited from doing that and shut down by the Brick Police.

Jim Hutchinson Jr. of the Fisherman magazine checked with the governor’s office and was assured that curbside pickup is still legal in N.J.

Under an emergency situation it’s not unusual for officials to reach beyond the law, and citizens must be ever alert to protect their civil  liberties. Hopefully, this matter will be resolved by tomorrow.

There have been lots of stripers in Raritan Bay, and Mark Roy planned to troll a few during a test run with his Release Me from Raritan Marina in Hazlet yesterday afternoon before the wind took over. However, the two boaters he talked to were shut out both trolling and with live bunkers as the waters were muddy.

Blackfishing is also open at this time, and Nick Honachefsky of Saltwater Underground has been catching them from shore on 2-ounce blackfish jigs tipped with half a green crab.

Small craft warnings are displayed to midnight. Friday morning will be cold again with west winds at 10-15 knots which increase to southwest 15-20 in the afternoon.

Winning a tournament is a thrill for any angler, but the joy is modified somewhat when it turns out that the winning fish fell just ounces short of being worth $100,000.

John Frione from Ct. was fishing with Joe Bartnecki on KB3 from Shark River in the Staten Island Tuna Club’s Saturday contest that had a $100,000 prize for the largest striped bass over 50 pounds. Anthony Arcabascio Jr. was trolling near them off Sandy Hook when Frione trolled a bass of about the right size on one of Anthony’s father’s lures — a Tony Maja Magic Mojo. Frione was a runaway winner of the modest contest purse, but the scale recorded 48.9 pounds — just short of the magic $10,000 50-pound mark.

Capt. Vinnie Vetere was fishing the contest with his Katfish Charters from Great Kills, and managed to put together a striper catch — but without a bass to challenge the leader. He noted that Frione is a friend, and on the next day another friend caught the bass he needed the day before as Capt. Rudy on Lady L. II boated a 52-pounder. 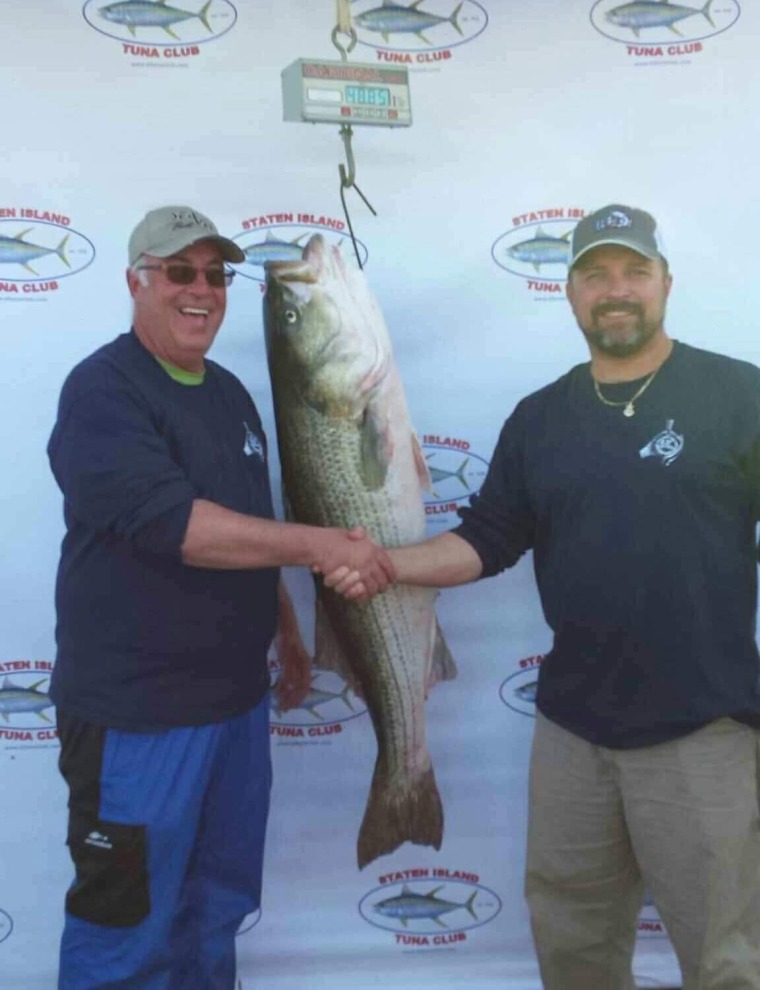 Yet another “50” was caught on Father’s Day — the eighth to be weighed so far this season at Fisherman’s Den in Belmar Marina. Jason Hadzimichalis was trolling a Tony Maja bunker spoon from High Life off Asbury Park with his father William when the 54-pounder hit.

It’s taken some time to track down last weekend’s shark weigh-ins at Brielle, but it appears that a 729.5-pound mako was weighed at Hoffman’s Marina for the Brett T. Bailey Mako Rodeo from Nor’ Easter. Capt. Tom Savastano had heard about that weigh-in over the weekend, but thought it wasn’t in a contest. I couldn’t find it on Hoffman’s web site, but came across it on their Facebook today. The Mako Rodeo organizers don’t send out press releases or maintain their web site. Last year it took weeks and many requests before I could find any results from that contest. In addition to the huge mako, there were other weigh-ins for Mako Rodeo listed in Hoffman’s facebook as follows: A 242-pound mako on Fin-ominal; a 206.5-pound thresher from Tra Sea Ann; and even a 196-pound bluefin tuna from Lucky Strike.

Capt. Rob Semkewyc was surprised to see very few fluke fishermen at Atlantic Highlands this morning. They must have read weather reports from earlier in the week that had predicted possible showers and thunderstorms in the morning. I didn’t see any of that in the forecast last night, and it was a picture perfect day. Semkewyc said fluking was also pretty good on his Sea Hunter with a couple of limits and a couple of 5-pounders.

The Jamaica from Brielle was in on yesterday’s big bluefish jigging bite that started out with 2-to-4-pounders. It was topped by the largest bluefish I’ve heard of this year — reported as a 20-pounder by Stephen Chesonis of Hopatcong. If he’s a Fisherman subscriber that blue would blow away the current leader in that division of the Dream Boat Challenge which is just 16.56 pounds from Long Island. As noted here last night, four of the 10 places in bluefish have been filled due to the 15-pound minimum. Golden Eagle from Belmar reported blues up to 18 pounds yesterday, but there was no report when this blog was published,

Speaking fof big blues, Vinny D’Anton of Wall was shocked to hook a 36-incher this morning in the Belmar surf on his Chug Bug. He said the fight lasted at least 15 minutes before he was able to release the chopper which may have been the largest in the Jersey surf during this disappointing season.  D’Anton also plugged two stripers up to 25 inches.

I had been casting at Spring Lake, but never raised anything to my popper there. A quick stop at Point Pleasant Canal on the way home around 7:30 revealed no one fishing at the public access, but I decided to make a few casts with the Z Man 6-inch jig — and I was surprised to catch two small stripers.

Those attending tonight’s meeting of the Salt Water Anglers of Bergen County are in for a treat as famed fluke pro Dave Lilly of Hazlet is the guest speaker.  Lilly is a regular winner in almost every fluke tournament along the Jersey Shore. The 8 p.m. meeting is at the American Legion, 33 W. Passaic St., Rochelle Park.

Mimi VI from Point Pleasant has scheduled a Hudson Canyon open trip that will leave at 10 p.m. Monday night and return at that time Tuesday. It’s limited to 12 at a $400 fare.  Call 732 370-8019 for reservations.. That boat is also open for bottom fishing at 7 a.m. on Friday.